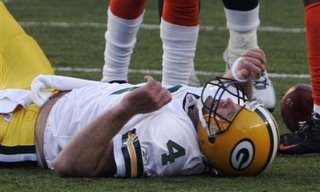 Well, we earned the respect of the Bengals despite losing to them. Sports fans, do not forget that it was just three years ago the Cincinnati Bengals were the laughingstock of the NFL and now are one of the best teams in the league. A moral victory, however, does not count as a “W” on the scoreboard.

It appears that, despite everything else, we had a decent chance to tie up the game right at the end anyway. It took trickery, good luck, and an extraordinary effort by #4 (all hail) but at the end of it, we came up just that much short. Of course, I couldn’t watch the game as once again it was not on TV. I understand why, but I still would have preferred to have watched it.

Favre’s quote after the game pretty much says it all, Packer fans: “It feels a lot like that (1992) but we were winning those. Now, in my mind, I feel like I can’t afford to waste one play. At times, I have to ad-lib. It’d be a hell of a lot of fun if we were winning. It’s hard to make a living this way.”