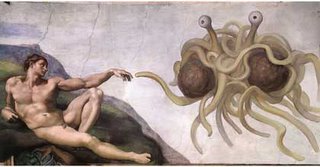 In a comprehensive and forceful opinion, and “after a six week trial that spanned twenty- one days and included countless hours of detailed expert witness presentations,” Judge Jones ruled that a statement disparaging the scientific validity of evolution, and encouraging high school students to consider intelligent design as an alternative, and recommending students read an ID textbook, Of Pandas and People, is crypto-creationism, a violation of the Establishment Clause, and contrary to both good science and good government. His opinion in the case of Kitzmiller v. Dover Area School District is clearly-reasoned, well-written (meaning it uses plain, simple language) and puts the entire dispute into context. Judge Jones even goes out of his way to deny being a judicial activist, placing the blame for the media circus and resulting legal decision squarely on the ID advocates who picked the fight in the first place.

Not many of my Loyal Readers will go through all 139 pages of the opinion in such loving detail as I have. So I will attempt a quick digest of it for you.

First, Judge Jones demonstrates that ID is religion masquerading as science: “The overwhelming evidence at trial established that ID is a religious view, a mere re-labeling of creationism, and not a scientific theory”:

Although proponents of the ID [Movement] occasionally suggest that the designer could be a space alien or a time-traveling cell biologist, no serious alternative to God as the designer has been proposed by members of the IDM, including Defendants’ expert witnesses. In fact, an explicit concession that the intelligent designer works outside the laws of nature and science and a direct reference to religion is Pandas’ rhetorical statement, “what kind of intelligent agent was it [the designer]” and answer: “On its own science cannot answer this question. It must leave it to religion and philosophy.”

Indeed, one of the editors of Of Pandas and People “has written that ID is a ‘ground clearing operation’ to allow Christianity to receive serious consideration.”

Then, we see that “an objective student would view the disclaimer as a strong official endorsement of religion.” After all, the school district required instructors to read a disclaimer to students which “singles out the theory of evolution for special treatment, misrepresents its status in the scientific community, causes students to doubt its validity without scientific justification, presents students with a religious alternative masquerading as a scientific theory, directs them to consult a creationist text as though it were a science resource, and instructs students to forego scientific inquiry in the public school classroom and instead to seek out religious instruction elsewhere.” When the teachers refused to read it (you go!) the administrators themselves stepped in to do it, adding extra weight, attention, and import to their message.

Third, the opinion conclusively demonstrates that ID is not science. Its attempt to claim scientific validity “fails on three different levels, any one of which is sufficient to preclude a determination that ID is science. They are: (1) ID violates the centuries-old ground rules of science by invoking and permitting supernatural causation; (2) the argument of irreducible complexity, central to ID, employs the same flawed and illogical contrived dualism that doomed creation science in the 1980’s; and (3) ID’s negative attacks on evolution have been refuted by the scientific community. … [I]t is additionally important to note that ID has failed to gain acceptance in the scientific community, it has not generated peer-reviewed publications, nor has it been the subject of testing and research.” Judge Jones’ description of what science is, and what it is not, begins on page 64 and should be read in its entirety by anyone interested in this subject (which is you if you’ve made it this far).

Quite perceptively, the Court advises that , since “ID proponents primarily argue for design through negative arguments against evolution,” “ID is at bottom premised upon a false dichotomy, namely, that to the extent evolutionary theory is discredited, ID is confirmed.” ID is not science – it is science’s opposite; it is doubt seeking comfort in the deus ex machina wherever and whenever a ready scientific explanation cannot be easily identified. Further, “ID argument is dependent upon setting a scientifically unreasonable burden of proof for the theory of evolution.”

In a footnote, Judge Jones accuses several members of the Dover School Board of “outright lies” regarding their intentions with regard to introducing ID to the curriculum. And so what were the intentions of ID’s advocates in Dover, PA, so crucial to the analysis of whether an unconstitutional establishment of religion has taken place? Easy; they “consciously chose to change Dover’s biology curriculum to advance religion.”

Yikes. Lying to the court, and getting caught doing it, is not a good way to impress the judge with one’s good-faith intentions. One board member “disclaimed any interest in creationism during his testimony,” despite substantial evidence against him that on multiple occasions when considering policy and issues before the board, he “identified ‘creationism’ as his number one issue and ‘school prayer’ as his number two issue.” Another board member, among other things, testified that he had previously said the separation of church and state is a myth and not something that he supports, that he believed “It is inexcusable to have a book that says man descended from apes with nothing to counterbalance it,” and that “This country wasn’t founded on Muslim beliefs or evolution. This country was founded on Christianity and our students should be taught as such.” This second board member’s wife testified in favor of the ID disclaimer prior to the school board adopting it, telling the school board that “evolution teaches nothing but lies,” quoting from Genesis, asking “how can we allow anything else to be taught in our schools,” reciting gospel verses telling people to become born again Christians, and stating that evolution violated the teachings of the Bible. “During this religious speech at a public Board meeting, Board members Buckingham [the husband] and Geesey [someone else] said ‘amen.’”

In that vein, “Although Defendants attempt to persuade this Court that each Board member who voted for the biology curriculum change did so for the secular purposed of improving science education and to exercise critical thinking skills, their contentions are simply irreconcilable with the record evidence. Their asserted purposes are a sham, and they are accordingly unavailing….”

So let’s review. We’ve got a state endorsement of religion, an absence of any substantial secular purpose, and an overwhelmingly religious effect. That would be failing all three prongs of the Lemon v. Kurtzman, 403 U.S. 602 (1971) test for establishment of religion. Additionally, “when government transgresses the limits of neutrality and acts in ways that show religious favoritism or sponsorship, it violates the Establishment Clause.” The Court struck down and permanently enjoined the policy. I’ll let Judge Jones’ conclusion stand for itself:

Both Defendants and many of the leading proponents of ID make a bedrock assumption which is utterly false. Their presupposition is that evolutionary theory is antithetical to a belief in the existence of a supreme being and to religion in general. Repeatedly in this trial, Plaintiffs’ scientific experts testified that the theory of evolution represents good science, is overwhelmingly accepted by the scientific community, and that it in no way conflicts with, nor does it deny, the existence of a divine creator.

To be sure, Darwin’s theory of evolution is imperfect. However, the fact that a scientific theory cannot yet render an explanation on every point should not be used as a pretext to thrust an untestable alternative hypothesis grounded in religion into the science classroom or to misrepresent well-established scientific propositions.

The citizens of the Dover area were poorly served by the members of the Board who voted for the ID Policy. It is ironic that several of these individuals, who so staunchly and proudly touted their religious convictions in public, would time and again lie to cover their tracks and disguise the real purpose behind the ID Policy.

With that said, we do not question that many of the leading advocates of ID have bona fide and deeply held beliefs which drive their scholarly endeavors. Nor do we controvert that ID should continue to be studied, debated, and discussed. As stated, our conclusion today is that it is unconstitutional to teach ID as an alternative to evolution in a public school science classroom.

Those who disagree with our holding will likely mark it as the product of an activist judge. If so, they will have erred as this is manifestly not an activist Court. Rather, this case came to us as the result of the activism of an ill-informed faction on a school board, aided by a national public interest law firm eager to find a constitutional test case on ID, who in combination drove the Board to adopt an imprudent and ultimately unconstitutional policy. The breathtaking inanity of the Board’s decision is evident when considered against the factual backdrop which has now been fully revealed through this trial. The students, parents, and teachers of the Dover Area School District deserved better than to be dragged into this legal maelstrom, with its resulting utter waste of monetary and personal resources.