I’ve been vacillating about whether I like George W. Bush as President or not. I’ve no particular love of any of the Democrats who have vied for the office in the last two election cycles (John Edwards seemed OK, Wesley Clark and Bill Bradley were interesting to think about too but never seriously possibilities in my mind.) On the one hand, Bush appears to me to be smarter than his critics claim he is, concerned about doing the morally right thing, and I think that a call to arms to rid the world of terrorism and spread liberal democracy to parts of the world where it has never before existed could represent a significant vision and mission for the country on scale with the Apollo Program of the 1960’s. But on the other hand, that mission seems to be getting mangled; Iraq is at best a mixed success; and while Bush himself seems to be a moral man he also seems to be surrounded by corruption and whatever personal integrity he might possess is marred by a streak of arrogance unbecoming a democratically-elected leader. Some of the things he has done I agree with (like nominating John Roberts to the Supreme Court), some I disagree with (like intentionally deficit spending).

The number and weight of things that he has done with which I disagree has now reached a critical mass. The President has authorized the National Security Agency to monitor communications by and between U.S. citizens — without seeking much, if any, Congressional approval and, more disturbingly, without even bothering to get a search warrant from the roll-over-for-the-government Foreign Intelligence Surveillance Court (FISC) first. To get a warrant from this court, the Administration does not need to publicly seek a warrant, the existence of which remains a matter of national security until and unless an indictment is issued and the suspect apprehended. Some statistics from this court indicate that the government asked for a warrant to do electronic eavesdropping 4,713 times over a two-year period (after 9/11). 4,613 were granted in full, 96 were modified by the court, and only 4 of those requests were denied. So it’s not like seeking a warrant from the FISC is a particularly heavy burden. The government can start surveillance for 15 days without a warrant under existing law anyway, but some of this spying on U.S. citizens has gone on for nearly four months straight without anyone outside of the intelligence-gathering community and the strategic decision-makers at 1600 Pennsylvania Avenue knowing anything about it.

This stinks so bad that a judge on the FISC has resigned, apparently in protest. There are calls for impeachment, but I don’t take them seriously yet. This in no way makes this story less disturbing. I call ’em like I see ’em here, Loyal Readers — and this is a big problem. There are checks and balances on executive power for a reason, and this is exactly one of them. 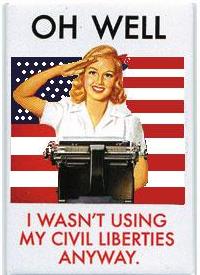 In a day and an age when an accused terrorist and enemy combatant — who happens to be held under the power of the United States and who happens to be a United States citizen himself — is nevertheless entitled to an indictment and a trial, the President seems to think that using a foreign intelligence gathering entity to pry into the private lives of Americans is perfectly OK.

Now, I’m not suggesting that anyone targeted by these orders is a nice guy or that the government is pulling names out of a hat for surveillance. I’m willing to give law enforcement, military, and political leaders the benefit of the doubt and assume that they really are looking for real bad guys, and that they have chosen to go after bad guys rather than political dissenters or others they merely dislike. But even those amongst my Loyal Readership who reflexively and automatically back this President, remember this: one day Democrats will be back in power, like it or not. Who’s to say that the next administration won’t take it a step further? Without a court or at least Congress checking up for abuses of power, we just have to take the President’s word for it that he’s (or she’s) doing right by us.

This is a huge cause for concern. It doesn’t just “look bad.” It is bad. By all means, Mr. President, we want you to take the steps necessary to defend our country and our citizens from terrorists. If you didn’t do that, it would be a dereliction of your duty. But you swore an oath to defend the Constitution of the United States. I, for one, expect and demand that you uphold that oath while discharging your duties of office. And yes, it is difficult to balance effective law enforcement, effective military planning, and chart a new course in foreign policy while still safeguarding civil liberties and freedoms. But if it were easy, we’d hire trained chimpanzees to do it.

Strangely, two successive Secretaries of State under this President, both of whom I respect and both of whom seem to be free of the taint of corruption, have been quietly critical of both the foreign and domestic agendas of the Bush Administration. I have become well convinced that Bush and the bulk of his minions are not competent to handle the challenge of leading the nation through these murky and uncertain times. I’m not saying that anyone could do better in the future (oh wait, yes, I am) and I’m definitely not saying that the world would look dramatically different today under a Gore or a Kerry administration. And I’m certainly not part of some radical promote-Cheney group.

So what am I saying? “The fish rots from the head,” for starters. “I expect better of this country’s leaders,” for finishers. While I was never really a huge fan of Bush, I am officially de-listing myself as even a lukewarm supporter. This President has lost whatever shreds of political loyalty I might otherwise have given him. He’s got some explaining to do.