So The Wife, my parents, and I go over to the new house — La Casa TL et Uxor for you Latin students — today. The former owner is still living in it. That only seemed reasonable after the closing got utterly screwed up. Problems with the closing included:

1. Original lender changing its mind at the last minute;
2. New lender demanding second appraisal of house and threatening to pull out at last minute again;
3. New lender having a mysterious three-day long “computer glitch” that prevented transmittal of closing documents to us by the closing date;
4. No one knowing what our interest rate, terms, or other pertinent portions of the loan were until the last minute — including our mortgage broker, whose job I thought it was to be on top of such things;
5. Multiple contradictory statements about whether the closing would occur on the scheduled date or not;
6. Not learning that the closing had been cancelled until two hours before it had been scheduled to occur (thanks to the “computer glitch”) described above;
7. Being given less than 24 hours’ notice to do a closing by mail;
8. My having to be in depositions all day on the day of the “mail” closing, which actually happened in segments at different offices throughout Knoxville.

Now, upon going over to La Casa, more things happen.

9. My mother and my wife have very different ideas about how to redecorate La Casa. Not a problem, you would think; The Wife’s preferences win because a) she owns the house and my mother does not, and b) she will live in the house and my mother will not. But the thing is, my mother has a habit of phrasing her “suggestions” in the imperative tense, which causes tremendous tension with The Wife and creates unhappiness within our family unit.
10. We’ve already received mail at La Casa. It was from our homeowners’ insurance company. It read:

DEAR POLICYHOLDER,
WE REGRET TO INFORM YOU THAT YOUR HOMEOWNERS INSURANCE POLICY WILL BE TERMINATED ON DECEMBER 31, 2005.
THIS POLICY IS BEING CANCELED DUE TO BREED OF DOG ( GERMAN SHEPHERD) WHICH ARE NOT ACCEPTABLE.
IF YOU ARE ENTITLED TO A REFUND AND IT IS NOT ENCLOSED, WE WILL SEND IT TO YOU IN THE VERY NEAR FUTURE.
NATRUALLY, YOU WILL WANT TO MAKE OTHER INSURANCE ARRANGEMENTS AS SOON AS POSSIBLE.
IF YOU ARE A MEMBER OF AAA, REST ASSURED THAT TERMINATION OF YOUR POLICY IN NO WAY AFFECTS YOUR AAA MEMBERSHIP.
SINCERELY,
THE TROLLS IN UNDERWRITING

The alleged German Shepherd in question looks like this: 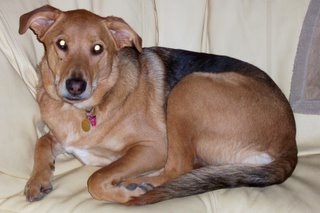 Let me assure you, Loyal Readers, the only thing at risk around this dog is a pork chop. She was described, during what I thought was small talk with the insurance agent, as a “Shepherd mix, who puts our guests in serious danger of being licked.”

Now, the letter from the Trolls in Underwriting was dated December 16, 2005. You will note that was eight days ago. So here’s an interesting question: Where in the Sam Hell was my insurance agent during all of this? Is this something that he didn’t think I’d be concerned about? But let’s leave that aside — how in the f**k are we going to get a new policy in place in four business days, especially around the holidays? And I’m in depositions all day on Tuesday again.

So we don’t get to move in to our new house until Tuesday at the earliest (nothing is open between now and then) and we won’t know what we can do about our insurance situation until then, either. It appears that we have not yet moved in to the house yet and we are already in default on our mortgage. Swell.