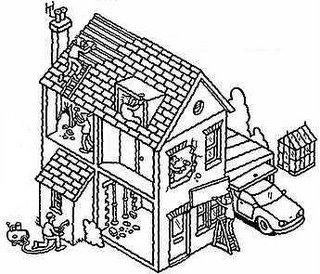 Today, The Wife and I made a pilgrimage to La Casa TL et Uxor, and brought with us nine gallons of various colors of paint, about sixty pounds of drywall joint compound, a variety of tools and other accessories, and a boom box. The Wife put up the plaster for our Tuscan kitchen (we had to get more from Wally World and there’s about eighty pounds of plaster up on the walls of our kitchen now) and I measured and prepped the living room for painting. I also got all the plates down from the walls and took measurements in a few other rooms. My plan-drawing skills were challenged during this process but having a complete plan is not quite as important as just figuring out the square footage of the rooms so we can eventually replace the carpet with Pergo.

We also swapped out the tacky light fixtures with some nicer-looking alabaster (and faux alabaster, shh, don’t tell anyone) ones, and upgraded the light bulbs to those fluorescent spiral thingies, which give off a lot more light. It makes a big difference, both in appearance and in visibility. It should also make a difference in our electric bill — the fluorescent spirals use about a quarter of the electricity of regular bulbs and if we hold on to the house for two years, they will pay for themselves as well as provide us with better lighting.

I also upgraded my shower to a hand-held, adjustable-setting head. A good shower is important to one’s quality of life. We’ll also have to experiment with the hot water settings.

We both put in about nine hours of work today, and there’s a lot more to do yet. I’ve still got the other rooms to tape up. The Mother-in-Law will be coming in tomorrow afternoon and she apparently wants to help out a lot with the interior painting and initial decoration.

Move-in looks like it will take place next weekend. I’m looking forward to having all this done and living in a house that The Wife and I actually own ourselves. I’m not looking forward to all the labor involved, though. And it feels like we’ve been spending money like drunken sailors; money we can ill afford to part with until my employment situation is resolved. So that’s a source of some anxiety in the midst of what is otherwise an exciting time.

We’re going to have a riot of colors throughout La Casa — the kitchen will be a terra cotta color; the guest room a nice yellow; our bedroom in sage green; the living room will be caramel-khaki. It looks like we’ll not have a TV in our living room at all. It also looks like we’ll be putting our office in the front room rather than the tiny back room. The back room will be a better guest room — it’s big enough for a bed and a nightstand, which will be helpful for our overnight guests, and closer to the spare bathroom. And we need the space for our computers and desks in the larger front room. There’s no good places to set up pet stations — no really good locations for the dog-food bowls, the water dishes, or the cats’ litter boxes are readily-apparent. We may have to take down some of the narrow closet doors and use the closets for these things. Well, so be it; the cats have to shit, just like everyone else.

So far, home ownership is proving to be a lot of work. At least it’s wintertime so there isn’t much to do with a dead lawn. Come springtime, though, that’ll be something else for me to deal with.