Some Republicans in the Senate (specifically, Chuck Grassley, Ted Stevens, Pete Domenici and Rick Santorum) want to give every American taxpayer a check for $100 to ease the “pain at the pump” because gas prices are rising. This would make them:

a) foolish, drunken sailors spending more money we don’t have
b) amazingly unimaginative in their attempt to address a serious problem
c) cravenly transparent in their appeal to voters
d) apparently desparate to keep their majority after so much shit has hit the fan
e) all of the above

You know, it used to be that Republicans (at least some of them) stood for fiscal conservatism — for watching the national budget, for safeguarding against waste, for crusading against government giveaways of money. But now? The GOP has become the party of massive cash giveaways financed by massive deficits. And I’m not the only Republican out there to be bitterly unhappy with the current state of affairs.

It also used to be — not very long ago at all — that leaders in the GOP had audacious new ideas. You might or might not have agreed with them, but they had some imagination and the ability to sell their vision of a better America. Those days are gone. This, however, is one of the most asinine and intellecutally deficient ideas to come out of Republican circles that I can recall in recent history. The country may not be going to hell in a handbasket, but we’ve got some pretty serious problems to deal with. And the people calling the shots haven’t got a clue what to do about it but bribe us with a cash advance on our national credit card.

And the thing of it is, it won’t work, on either a policy or a political level. People will cash their checks and it will have no noticeable effect on anything — not their political approval of Republicans or Democrats, not their gas consumption habits, not the price of gasoline — it will accomplish absolutely nothing other than draining $25 billion (there’s about 250 million taxpayers, who would get $100 each) from the Treasury. Which, in case you’ve missed it, is currently spending $535 billion more in government outlays than the government takes in by way of taxes and other revenues.

For what? What benefit do we get for borrowing another $25 billion from the Chinese and the Europeans? A hundred dollars at today’s gas prices buys a little bit more than 34 gallons of gas. Maybe a weeks’ worth of groceries for a family of four — if they’re careful about how they spend it. A single consumer in America is not going to appreciably feel the effects of $100 over the course of the next five months’ worth of daily complaints about gas prices. And — this one’s for you, my Loyal Readers who self-identify as Democrats — is $100 enough to make you change your vote to the GOP?

The logical response to this sort of lunacy offered by the GOP would be to latch on to the Democrats’ proposal. But alas, they don’t really have one. This is not really a surprise. Sure, Democrats (and some Republicans) want to see the FTC empowered to go after “price gougers.” As a threshold matter, the FTC can already do that. But more importantly, what does “price gouging” mean in an oil market like this? The Democrats’ call for investigation into price-gouging will reveal these facts which I suspect the Democrats would rather not be identified with:

The retail gas stations are reacting to prices more or less imposed on them by their suppliers. As always, they are making little to no profit on selling gas — so it’s very difficult to properly place the blame on the guy running the corner station for the price he has to charge. 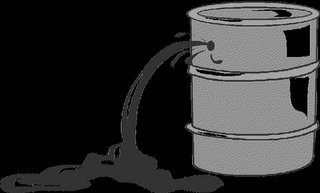 Refineries are offering the somewhat mysterious excuse that they are still switching from winter blends to summer blends of their product (strange that they didn’t foresee the change in seasons coming and time the creation of their product to match) and the somewhat more concrete justification for their high price that the federal government, under the leadership of Presidential candidates needing to pander to Iowa caucus voters, and directed by the aforementioned Senator Grassley, has mandated phasing out the use of MTBE as a refining catalyst in favor of corn-based ethanol. That phase-out is expensive and the new product does cost more to make. Maybe it’s the right move anyway, but it is a credible portion of the reasons why gas costs more now than it used to. Anyway, refineries are running slow and more expensive than they used to, and the fault for this lies in forces beyond the refiners’ control.

Real answers rest in crude oil prices on the global market. What’s been happening there? Supply is down — many of the Gulf of Mexico’s platforms are not yet recovered from last year’s hurricanes, and Iraqi oil has not yet returned to the global market because after three years of U.S. occupation, the pipelines have still not been adequately rebuilt. Now, Iraq’s oil used to find its way to Europe and Japan rather than the Americas, but it’s still pressure on the global market. Political instability in Nigeria is affecting its output, as well. While supply is diminishing, demand is increasing, particularly from newly-industrializing countries with massive populations (India and China) and the expansion of large-scale industrialization into eastern Europe. If you, Loyal Reader, have ever taken microeconomics, then you can tell me what happens when demand increases and supply decreases.

So to sum up — who’s to blame for the various factors behind rising gasoline prices?

• Problem: Decreased supply to global market of Iraqi crude oil.
• Culprit: Iraqi insurgents preventing completion of pipelines (how they got into that position and why they are still in that position is a different issue).

Yes, oil companies are making big profits. That’s to be expected when they are the ones selling a product that is in high demand and short supply. That’s not price-gouging — that’s just how economics works. Do you want to spend less on gas? Drive less. Can’t figure out how to drive less? Then suck it up, buttercup! The problem lies not with price-gougers but with poor decisions we have made as a people. Who’s to blame for high gas prices? You won’t like the answer if the question bothers you that much. 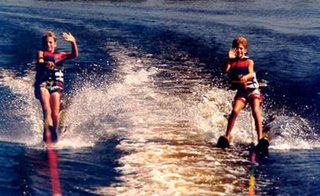 The other day when I filled up the Blue Bullet ($2.79 a gallon here) I overheard a guy loudly complaining that it cost him over $100 to fill up his boat last weekend to take his kids water-skiing. That distills America’s attitude about rising oil prices into a single, telling vingette. And guess what this dude is going to do with his $100 check from Senator Stevens when it comes later this summer? Taking his kids water-skiing again — this time on the public’s dime. “You’re welcome, dude!”

It’s just a bad situation. Nothing is going to change it. Americans simply aren’t going to change their fuel consumption habits no matter how much gas costs. You know that statement is correct, and in each of their craven, politically cowardly hearts, so does each and every Member of Congress, including these four yahoos who can’t think of anything better to do than bribe you with your own money.

So I’m not asking you to trade in your big, heavy, gas-guzzling SUV or to walk three blocks to the 7-11 to buy your lottery tickets and cigarettes. I alredy know you’re special and it’s really the other guy who should conserve to drive down demand. We’ve already been over that. But look. Doing a rain dance in a drought doesn’t make it less likely to rain and it doesn’t cost anything. So dance away and hope for the gas fairy to show up. But lighting $25 billion on fire isn’t a no-cost rain dance. $100 won’t make a damned bit of difference to you, me, or anyone else — and it’s probably best if we all just toughen up and pay for our gas the old-fashioned way — with real money.