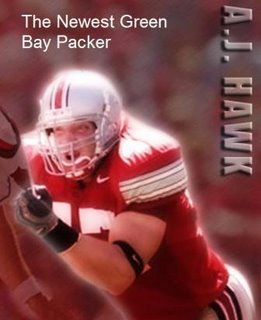 As far as I’m concerned, Green Bay has done well this week. There is reason to be optimistic about 2007.

Brett Favre is going to return for a final year, and undoubtedly will help train sophomore Aaron Rodgers to take the reins in 2007. I’m glad; I’ll get another year to root for the most likeable QB in football. Hey, he can’t possibly throw as many interceptions in 2006 as he did last year, right? And, like I say, I think we’ll be seeing Aaron Rodgers, in a limited but meaningful capacity, on the field to get ready for Favre’s imminent retirement.

Just yesterday, Charles Woodson signed with the team to join the defensive squad. I’m wary of former Oakland Raiders, since that team seems to inspire different kinds of discipline issues than the Packer system likes to see, but he’s in the prime of his career.

For its #1 pick today, the Packers chose A.J. Hawk from The Ohio State University. Hawk stole the show all year in Canton and, according to all the scouts, comes to the NFL ready to play from day one. He’ll need to learn the defensive schemes, but he can do that — and he’s fast, smart, disciplined, and keeps his eye on the ball.

The clear agenda is to beef up a defense which was suspiciously weak last year. It is good to see the front office showing faith in Favre — he had a terrible year in 2005, but was beset with an unusual rash of injuries to key offensive players and left without weapons. So the team is focusing its efforts where they are critically needed and making smart moves. Even if there are more problems on offense, with a strong defense and Brett Favre, Green Bay should always have an acceptable chance to win pretty much every game on its schedule. That doesn’t mean a 16-0 or 15-1 season, necessarily; just that we’ll be hanging in there.

Also, for those following the draft, I commend Yahoo! Sports‘ and the Sporting News‘ suprisingly accurate predictions by Dan Pompei. About the only significant mistake Pompei has made in his predictions, at least as of about 3:00 when I’m publishing this post, is the #3 pick of former Longhorn quarterback Vince Young. Aside from that, he’s been about as close to dead-on as can be reasonably expected. Move over, Mel Kiper! (Yes, I know Kiper’s list looks a lot like Pompei’s.)

UPDATE: The Packers played a lot more today after my post. They traded Javon Walker to the Broncos for Denver’s second-round pick — and then traded that pick to Atlanta for three picks from the Falcons. This only a few minutes after the Packers traded their own second-round pick to New England in exchange for two of the Patriots’ lower-round picks. They used the only other pick they had today, one of the picks traded from Atlanta, to get an offensive tackle. Big changes are afoot if the Packers value quantity of picks rather than quality. 2007 will obviously be a transition year — new coach, breaking in the new starting QB, a new receiving corps, a bunch of new defensive and line positions — and the team is going to get younger. And, I bet, faster. It’ll be sad to see some of the old familiar names phased out, but that’s what is needed for the long-term good of the team.