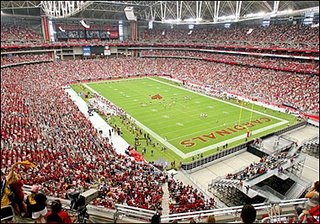 From my University of Phoenix e-mail inbox:

Our investment grants the University stadium signage, advertising, marketing, merchandising, promotional and charitable opportunities. In addition, we have campuses in almost every NFL city. The NFL is the country’s most successful and visible professional sports league and their demographics overlap significantly with ours. This exclusive partnership will enable the University to reach a broader array of students in an exciting venue.

Here in Arizona, there is a great deal of excitement surrounding the Cardinals as a result of the new stadium. And this is no ordinary stadium … it is one of the most spectacular facilities of its kind in the world. The stadium has been recognized for its bold design, world-class architecture, cutting-edge technology and fan environment. Throughout its history, University of Phoenix has been synonymous with innovation. So it’s fitting to place the name of the world’s most innovative university on the world’s most innovative stadium.

As you might imagine, this partnership is generating a lot of media coverage, much of it silly (to increase entertainment value) and some of it serious. We’re sure there will be a lively debate about it for some time and this is just the type of free speech that we value as a higher education institution. As a University of Phoenix faculty member, we hope that you too will feel free to express your opinion in the public marketplace or directly to us by replying to this message.

This partnership is a precursor to a larger national branding campaign scheduled to begin in January. Many faculty and students have told us that you strongly believe in the value of our programs, but as a young institution, you have also told us that we need to invest more in telling this story. That’s what this branding opportunity will help us do. But the story won’t stop there… please be assured that we are making similar investments in our academic programs and services. What has made the University so successful over the years is just this willingness to invest in both the academic and business operations equally. Of course, we hope you’ll share our excitement as we focus on the University’s brand and image through a variety of communication strategies.

I’ve already noticed in the past several months that the bell curve of the quality of my students has grown steeper; I’m getting some pretty good students, and I’m getting some real duds, people whose skills and intelligence suggest that they really don’t belong in college at all. Already, in my current cycle of classes, I’ve got students who can’t read, can’t write, and can’t follow instructions. I’ve also got a handful students who are quite bright and getting near-perfect grades. If my class ended now, I’d hand out as many “A’s” as “F’s,” and very few “C’s.” But, my average would be what it always has been — somewhere between C- and C+.

Somehow, I think that the enhanced advertising is only going to make this problem worse. To compound the problem, the University is dropping its critical thinking requirement for the overall curriculum, and de-emphasizing writing skills. What, exactly, is this well-marketed degree going to mean? Do I want to continue to be associated with this sort of thing? I’m really becoming concerned that this is nothing more than a diploma mill — and when I’m told to pass through students who don’t demonstrate competence in my subject, that’s the bright line and I’ll give them my resignation.

A nine-figure, twenty-year deal to advertise in as prominent a venue as an NFL stadium suggests to me that the process has moved another significant step in that direction.