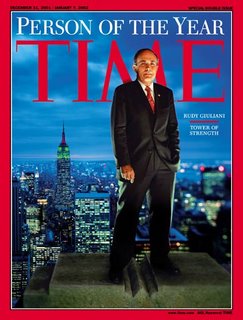 Why should people like Rudy Guiliani to be the next President? Well, for one thing, he’s not foaming at the mouth about his partisanship. No doubt, he’s a Republican who campaigns hard for fellow Republicans against Democrats. But he also realizes that not only are we all Republicans or Democrats or moderates or whatever, we’re also all Americans, and at the end of the day, that counts for more. Sounds like someone else I kind of like in office these days.

Look, Bill Clinton melted down in front of the entire world the other day, and may have done his wife’s Presidential ambitions incalculable damage. That’s plenty of fodder for professional Clinton-haters and Karl Rove wannabes. But Guiliani is exactly right to say “Hey, Chris Wallace and all the rest of you trained Dobermans at FOX News, blame the terrorists.”

Okay, so when do the campaign committees form? It may be a lost cause but Rudy‘s seeming like the last sane person in America who I could even stand to see be President in 2009.