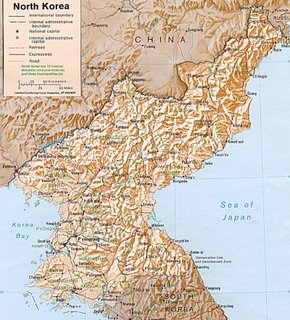 A friend asked “How is it that North Korea has adopted such an ‘us-against-the-world’ mentality?” At the risk (read: certainty) of sounding shrill, I have to protest that this is nothing new and nothing that we in the West have created. It is, however, something we in the West will need to deal with.

North Korea has hardly been “alone against the world” since the end of the Korean War and the U.S. was not the only architect of the division of the country. Korea was divided between the Soviets and the U.S. before the end of World War II when it became apparent that the Japanese protectorate that the area had been living under since the early 20th century was going to dissolve in the face of Japan’s imminent defeat.

Kim Il-Sung (Big Kim) was a tool of the Soviets, armed, funded, and paid for by the then-cooperating USSR and PRC, who were hoping to evangelize their vision of expanding socialist polities. 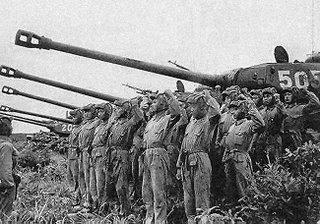 Since the truce that ended the conflict (technically, the war is still going on) Big Kim Il-Sung’s government promoted a policy of “self-reliance,” which initially made it one of the most industrialized nations in Asia; but that title to his policies was pretty much a joke, as North Korean “self-reliance” depended on rich subsidies from ideological allies China and the Soviet Union.

For most of the sixties, North Korea was a pawn in a struggle for ideological supremacy between the PRC and the USSR, which Big Kim thoroughly mishandled by first siding with the Chinese on most geopolitical issues, and after learning to his dismay that the PRC had less to give by way of foreign support, he then began to roundly criticize Mao’s internal politics. Having alienated both of his major-power sponsors, Big Kim got to watch his formerly (relatively) advanced country stagnate and slide into poverty. His solution was to clamp down harder on his control of the military, and to borrow money from Western sources. He defaulted on those loans in the late 80’s, and thus made himself a pariah to the West. Big Kim died in 1994 (but the office of President of the DPRK is still held open for him) and his excerable son, Kim Jong-Il (hereinafter “Lil’ Kim”) took over. 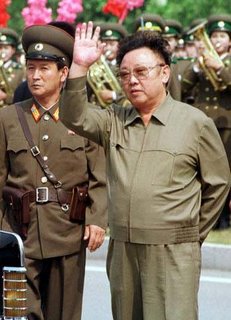 Lil’ Kim has done nothing in the past 12 years to reform the North Korean economy, restructure his government to permit more individual freedoms, or engage in any kind of meaningful dialogue with the rest of the world. Quite the opposite. There is only one answer to the “guns-or-butter” question for Lil’ Kim, and his cholesterol level is not in any danger.

He still begs for money from China, which cntinues to dish out the dough even though Lil’ Kim is not a particularly obedient or reliable client. Much of the rest of North Korean’s extant industrial capabilities is the result of his periodic rounds of extortion based on the apparently massive military of the DPRK; some of the funds used to develop the current military came from U.S. and European coffers in exchange for Lil’ Kim’s promises to not a) build up his infantry, then b) not develop mid-range tactical missile technology, then c) not develop breeder reactors, then d) not use the plutonium generated by his breeder reactors to generate warheads, then e) not develop long-range tactical missile technology, and now f) not sell any of his military technology to rich terrorists (like al-Qaeda) for desperately-needed hard cash. The oppressed, uneducated, and terrified millions of people living under his rule starve and the only means of any kind of personal advancement in that country is either to be in the military or to serve its industrial needs; the few observers to travel to the area report a culture best described as a realization of Orwell’s worst fever dreams. 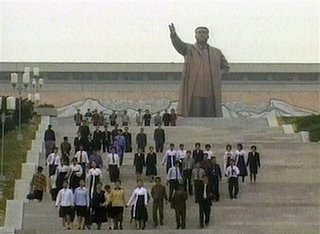 However, despite periodic scoldings and generous payments to Lil’ Kim’s junta by varying segments of the global community, under Lil’ Kim’s leadership the DPRK has a) built the second-largest infantry in Asia and aimed all of them at targets south of the DMZ; b) successfully built and tested missiles capable of striking Beijing, Seoul, and Tokyo; c) created breeder reactors for “peaceful” generation of electricity; d) tested a two-stage ballistic missile with sufficient range to reach Los Angeles; and yesterday e) performed a successful test of a nuclear warhead. However, we are asked to trust him when he says that he hasn’t sold any weapons systems to terrorist groups, despite the fact that North Korea’s only export of any kind is fear of the lunatic called “Dear Leader” by his subjects.

I am far from encouraged that the response to North Korea’s nuclear test is going to be a “measured response” of more scoldings and toothless economic sanctions which will last until he decides to hold the world hostage again. Starving this guy out of power has clearly not worked, in part because he hasn’t really been starved and in part because his military isn’t starving, just his civilian population. Whether the massive army he has created can do more than sing patriotic songs and goose-step across parade grounds is a good question; however, we should bear in mind the horrific casualty figures from the active war in the 1950’s as well as the fact that the young men carrying those guns across those parade grounds are now third-generation creatures of the most oppressive mind-control techniques the world has yet seen. I’m not saying that Lil’ Kim isn’t the right guy to do business with. That should be obvious. I’m saying he’s flat-out evil and can’t be trusted with anything as dangerous as a pointy stick. 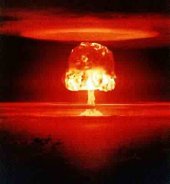 The reason we aren’t taking him on in the only way that could meaningfully alter his course of behavior is that our misadventures from the Tigris to the Khyber Pass have overextended our ability to conduct military operations in any other theater of operations. Having rendered ourselves effectively impotent against this malicious dwarf whose ideological resemblence to Stalin is ultimately defeated by his lack of Stalin’s good qualities (that is, a snappy fashion sense and the theoretical desire to feed his own people), I suppose all that we realistically can to is cluck disapprovingly and loudly at his use of nuclear devices and hope that none of our so-called “partners for peace” give in to another round of his fundraising cycle of extort-lie-and-repeat.