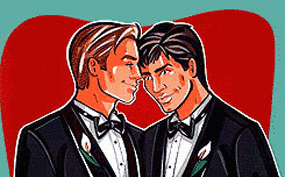 The New Jersey Supreme Court last week came to the conclusion that under that state’s constitution, the rights of marriage cannot be lawfully withheld from same-sex couples.

If you read the opinion (linked again here) you will see a 4-3 split. The decision was not a one-vote majority in favor of extending the rights of marriage to same-sex couples. On that point, the New Jersey court was unanimous. Rather, the 4-3 split was on the issue of the use of the word “marriage.” The minority would have mandated that “marriage,” using that word, be offered to same-sex couples. But the majority of the New Jersey Supreme Court voted to give the Legislature six months to decide whether to call this arrangement “marriage,” “civil union,” or something else, or else the court will take action on its own and likely extend marraige to same-sex couples. It is very likely, given this ultimatum and the politics of the issue, that New Jersey will adopt “civil unions,” much like the Legislature in Vermont did back in 2000.

Interestingly, there’s one guy a lot of political jukies might remember who would marry his lover if he could.

And predictably, the Republicans are using the decision as a tonic to revitalize their hopes of retaining control of the government, a goal which had been starting to look all but conceded to the Democrats. Socially conservative activists are thrilled to have a bogeyman to rally against and to “energize the base.” Sadly, though, the GOP needs to overcome a problem, in that the party’s national leader has already endorsed the idea of “civil unions” for gay couples:

That Bush and his cronies today rail against the “judicial activism” of a decision that Bush himself invited is hypocrisy on a high level, which of course is no barrier to political activity.

I have been saying for a long time that there is no logical reason not to extend the rights of marriage to same-sex couples. Like the majority of the New Jersey Supreme Court, I am concerned more with substance than labels and I do not care if the legal institution to be created is called “marriage” or something else; a rose by any other name and all that. But I have consistently insisted that gay Americans be treated like Americans and be given the same ability to plan their lives with the people they have fallen in love with that heterosexuals enjoy. It should be as easy for them as it was for The Wife and I.

Dale Carpenter writes about the issue on Volokh, praising the “rights-forcing” but not democracy-reliant nor “status-forcing” middle way on the issue found by the New Jersey Supreme Court:

Of course no court can mandate social acceptance; but that is not what gay-marriage litigants asked for. What a court can do is remove any role the law might play in reinforcing social inequality. Denying the status of marriage to gay couples lends some continued legitimacy to the idea that they should not be accepted socially as the equal of married couples. For many people, that may be the correct message to send. But we cannot deny that it is sent and that law has played a role in sending it. Erasing that final status distinction at least ensures that, if social inequality between gay and straight couples remains, it will be no fault of the law.

The New Jersey Supreme Court has given that state’s political leaders the option to avoid using touchy terminology while preserving and promoting substantive equality for all Americans. Social acceptance of these relationships can come later, and if it does, it will do so as a result of observing that homosexual relationships are created and dissolve in much the same manner as heterosexual ones, and seeing that indeed, the recognition of such relationships causes no harm to anyone else.

Prof. Carpenter also makes an interesting observation — there are now five states (California, Connecticut, Massachusetts, New Jersey, and Vermont) that have some form of recognition for gay couples. One in six Americans lives in a state that has adopted such recognition through democratic processes; one in five has had substantial democratic input into the process of recognizing this clash of the demands of equality with the shibboleth of “tradition” and observed not a single ill social effect.

So I applaud — stand up and cheer, really — this opinion. And Republicans who would use this issue as a wedge should remember that in so doing, they are running afoul of the President’s inartful attempt to dodge the issue.