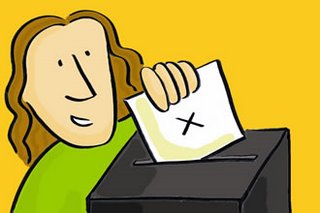 This is shaping up to be one of the most exciting, unpredictable elections in memory. It’s hard to get into the House races in any meaningful way, because they are going to be local rather than national in their focus. That makes the whole thing hard to predict. The best compilations I’ve found so far that look at the data on a district-by-district basis are Pollster.com and the New York Times.

Pollster has the Democrats pegged to have a one-vote majority of seats in the House, with 24 additional seats as “toss-ups.” The New York Times, on the other hand, lists its polls at 205 for the GOP, 214 for the Democrats and 16 races as “toss-ups.” But I have to think both of these are somewhat exaggerated in favor of the opposition party; incumbency has a great deal of power and influence, and people have fewer beefs with their own Congressman than they do with Congress in general.

In the Senate, there are now three “toss-up” races according to Pollster, namely Missouri, Tennessee, and Virginia. According to the Times, New Jersey is also a toss-up, but Pollster is anticipating that the Democrats retain that seat. If the Times is right, the results will be 48-48, with the remaining four seats determining the balance; if Pollster is right, the Democrats will need two out of the three toss-ups to get a majority in the Senate. Both present reasonably plausible scenarios for an exact 50-50 split in the Senate (assuming one counts Joe Liberman as a Democrat, which I know some do not). Senate races tending to be more about national issues, I’m a bit more confident in the reported poll results being more reliable.

This is shaping up to be one of the most exciting, down-to-the-wire elections in memory. It’s hard to get into the House races in any meaningful way, because they are local. That makes the whole thing hard to predict. Which, of course, makes it tremendous fun to watch — as long as you don’t have a vested interest in one side or the other winning. I would not be surprised to see either party with control of the House in single-digit margins, and I would not be surprised to see the Senate split within one vote, for one of the most closely-divided Congresses in history. The race will be quite exciting, and will right down to the wire. We may not know the final results for a few weeks after November 7.