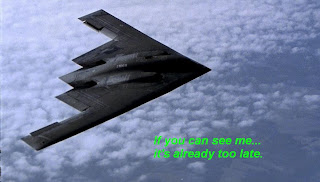 Driving back from lunch today, I noticed that a B-2 bomber was doing test flights. It’s a damned impressive thing to see one of these things in the sky.

I first noticed the plane when it took off, since the office is literally in the flightpath for the aircraft assembly plant. It banked, revealing itself as a huge black chevron, surreal and intimidating, dominating the entire sky over my head. Then it levelled to the ground, and became nearly invisible to the human eye — if you already know where it is, and it’s in front of a cloud, you can see what looks like a black smudge that might be a bird or something. Against a clear blue sky, there’s less of that to see. What’s even more eerie is that it’s silent. No sounds of jetwash or anything. When the pilot turned on his landing lights, it was easier to track, but the plane was in flight, it was close to impossible to track.

Maybe it’s not quite the thing for quelling a religiously-motivated urban insurgency in Baghdad. But it certainly is the thing for taking out an enemy’s infrastructure. And I’m really glad we have it instead of someone else.