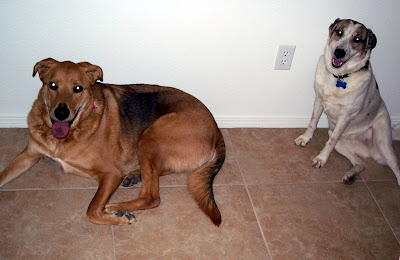 They should. They were on the loose for nearly three hours today. See, I got home before The Wife, so I let them out of their kennels, fed them, and let them out into the back yard to relieve themselves. Then I went upstairs, fed the cats, changed into shorts and a T-shirt to go take them for a walk, and came downstairs to get the dogs.

That’s when I noticed that the lawn had been mowed. Fearing the worst, I checked the side yard. Sure enough, the gardeners hired by the landlord had left the gate wide open. I’d been up in the bedroom for at least ten minutes, maybe more. So I went out looking for them. First, I shouted their names up and down the street. Nothing.

Then I got in the car and started driving around for the dogs. Nowhere. I drove up and down every street in the neighborhood, shouting their names until my throat hurt. Nothing. I expanded my search, and checked the them. They’d been gone for half an hour. I wanted to call The Wife, but I noticed my phone was missing. After a check back at the house — I don’t know why, the dogs have no idea where they live — I decided to make another circuit of the neighborhood, checking the construction sites nearby.

Half an hour of driving around later, I still hadn’t found the dogs, and The Wife still hadn’t come home, and I still didn’t have my cell phone. Apparently I’d left it at the office. If someone had found the dogs, hopefully they would call the number on the collars, which was my phone. So I had to get it.

On the way out to the office, I saw The Wife driving in to the Mansion. So I turned around and got her, and we looked for the dogs together. We searched in pretty much the same places I had looked on my own, and asked people out walking their obedient, well-behaved, leashed dogs.

I felt terrible. It was my mistake that let the dogs loose. People drive so fast, and the dogs are so dumb. It was easy to imagine the dogs getting hit, splitting up for some reason, getting taken by someone with less-than-kind motives, wandering out into the desert and getting lost, and us never getting to see them again. And it would all be my fault.

The Wife was much more calm about the whole situation than me. She made us get food, which did help. She reminded me that the dogs would get picked up by the pound and while we might have to pay a fine, we’d get them back. It made me feel a little bit better. She had her theories about where the dogs might have gone. One idea was they might have been attracted to the house that burned out down the street and now, four weeks later, is still sitting unrepaired.

Well, they weren’t there, but the Rottweiler and German Shepherd across the street were barking like they always do when we walk the dogs past them. So I looked up the street, and sure enough, there were our naughty little doggies, wandering in and out of someone’s garage like they owned the place.

It was all I could do to keep a friendly, attracting voice and call them into the car — I was mad and relieved at the same time. But I got them in the car and got them home. Safe at last, I felt redeemed at finding the missing critters. They must have drunk a quart of water between them, and they were panting like I’d never seen them pant before.

Now, I have to make a sign for the back gate that says, “¡Para el amor del dios cerciórese de por favor que la puerta sea cerrada cuando usted se va!” And worry about whatever it was the dogs ate while they had their big adventure. Hopefully nothing makes them sick. But at least they’re home where they belong.