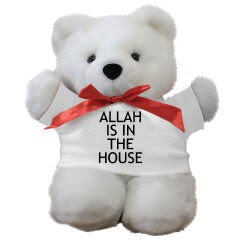 A British schoolteacher in Sudan let her young students name a teddy bear “Mohammed.” So Muslims understandably want her to be executed (instead of merely jailed, which has already been done) for “fomenting hatred towards religion.”

Apparently, no one else in Sudan is doing anything worthy of capital punishment.

Help me out here. Isn’t “Mohammed” the most common name given to Muslim boys around the world? It’s cool to name your son that, but if you name your teddy bear that — out with the scimitars, it’s time to behead another infidel!

Oh, and “fomenting hatred towards religion”? These protesters have done more than the schoolteacher ever did to portray their religion as worthy of contempt. I think this story illustrates better than any other I could have even imagined as to just how silly and dangerous religious fanatacism is. (I feel quite safe in suggesting that no, not every Muslim thinks that naming a teddy bear “Mohammed” is a crime worthy of death. But still.)

This would be exquisitely funny if it weren’t so colossally grotesque. And it is the distilled essence of why religion should stay the hell out of government.

Hey, Sudanese Muslims! Ooh, did I insult your religion of peace? Go ahead, call a fatwa down on me. I want you to. I dare you to. But you don’t have the guts. How do I know that? Your faith is so damn weak it’s threatened by a teddy bear. So I guess I’ll just post some more pictures while I’m not being fatwa’ed by your pathetic, murderous asses. And you know what? I think pigs are cute. I got stuffed toy pigs, I got more teddy bears. 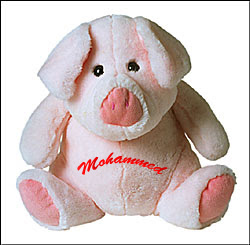 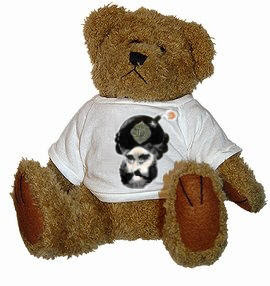 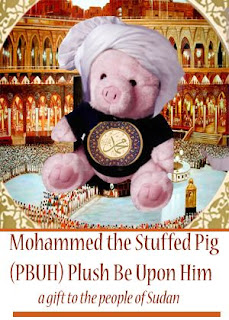