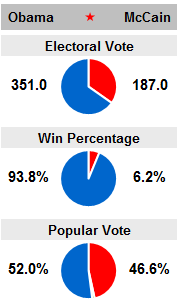 National polls show Obama leading right now by anywhere from four to ten points, with the average being a 6.8% advantage. This spells doom for my bet of a bottle of good Scotch. But on the other hand, the conventional wisdom is that no matter what the polls say in the weeks leading to an election, no matter what the issues are or who the candidates might be, the polls always narrow, the front-runner’s lead always evaporates somewhat, right before the election happens and the results are closer than the pre-election polls would indicate. Which is to say that I should not give up hope for winning my bet the way I’ve given up any belief that McCain has a credible shot at actually winning.

But, comebacks from a deficit this deep are not unknown. Nate Silver at fivethirtyeight.com (the best polling site on the net and I’m not being paid to tell you that — so I don’t mind hotlinking their charts all that much since I encourage you to go there directly and patronize their many fine advertisers) points out two elections in which a contender has narrowed a gap of that size, or more.

1968: Hubert Humphrey trailed Nixon by fifteen points in early October. But on election day, the result was a popular vote differential within less than one percent. Nixon slammed Humphrey in the Electoral College, but the point is the popular vote differential narrowed by almost enough for HHH to put himself in spitting distance of actually winning — and he did it in less than four weeks.

1980: Ronald Reagan trailed incumbent Jimmy Carter by eight points as on October 26, 1980, and went on to win the election outright, with a popular margin of victory of nearly ten percent. That’s an eighteen-point turnaround in less than two weeks.

There are 22 days left in this election. The polls will narrow, but realistic observers of any perspective should take a step back and understand what is really going on.

In both historical cases discussed by Silver, external events (the Vietnam War and the Iranian Hostage Crisis) as well as ongoing economic doldrums mitiated in favor of these “comebacks” and it seems likely to me that something was wrong with both of the polls used to describe the starting points of the turnarounds rather than a very sudden and dramatic shift in the electorate’s mood on election day.

External events do not favor John McCain — not because of anything he’s done but rather because as the Republican nominee, he gets to carry water for the incumbent Administration which has presided over what 91% of the public feels is a complete meltdown of our network of financial institutions. (One wonders what, exactly, the other 9% are thinking. Maybe they’re the short-sellers and they’ve made scads over the last month.)

And modern polling is significantly better than it was in the 1960’s and 1970’s. Not perfect, but pollsters have learned a thing or two about their craft and are better-able to formulate sample pools and use sophisticated mathematical models to extract data from them. I’m not saying the polls can be wrong. But I really don’t think a “Dewey Beats Truman” situation is brewing here. Yes, a year ago the CW had it as a foregone conclusion that right about now it would be a within-a-point duel between Rudy! and Hillary! and everybody else was going to be an also-ran. Things have changed dramatically. But it’s not 2007 anymore and Election Day looms in our immediate future.

The questions I have are not whether Obama will win, but rather by how much, and whether he will have any coattails, especially in the Senate. Projections are about one in four that Democrats will emerge from the election with a “fillibuster-proof” Senate majority of 60 or more seats. At that point, the real question is what will Democrats do once they absolutely control all of the political branches.