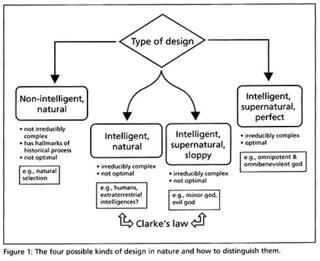 Apparently, there is now a cottage industry of creationists leading tours through natural history museums, explaining why all of the preserved evidence of evolution on display there is simply false.

For those of you checking in on the flowchart to the right, the term “Clarke’s Law” refers to Arthur C. Clarke’s First Law, which of course is not a “law” at all but rather an observation. Particularly appropos is the Asimov Corollary.

An aside: you’ll notice that there are two options for the output of whatever force you select as being responsible for the design of human beings. Only one choice allows for an “optimal” design. The presence of objects like the appendix within our anatomy suggests strongly that our bodies are not optimally designed. You’ll also notice that there is only one choice that allows for “hallmarks of historical process,” which is to say that there are parts of the body which were of use to evolutionary ancestors but not of use to the new species. Consider then for a moment that there are human beings born, even in this day and age, with vestigial tails.

But back to the article. What really bugs me is that, after reading the article, you can see that the kids on the tour are hungry for knowledge and genuinely curious about the world, with that sense of wonder and intellectual hunger that is so powerful and so important to mankind’s search for knowledge. And that scientific curiosity is being fed with a bunch of creationist nonsense dressed up in the robes of righteousness, based on half-truths if not outright misunderstandings about what science is and is not, and what it can do and what it has not done yet.

How many of these tour guides think that the world would have been a better place if we had let God’s will work its course across the earth, spreading pestilence and plague across the face of the planet? How many of them believe in the Bible’s endorsement of geocentric cosmology? But I bet all of them like science just fine when it does things like eradicate smallpox and creates transglobal communication satellites.

People, you don’t have to give up your faith in order to acknowledge science. If you believe in God, then surely you must also believe that God gave you reason and logic and intelligence, and the ability to sense and perceive the world around you — and most importantly, that He intends for you to use these gifts. You don’t have to blind yourself to the truth in order to achieve religious enlightenment. Or are you going to say that all this enlightenment is the fruit of the forbidden tree and selectively turn your back on those achievements of science you find distasteful? Some people find nuclear weapons distasteful and wish that the technology enabling them had never been created, but they nevertheless acknowledge their existence. The djinni are out of the bottle and pretending that something is not so will not change it. And you do your children a terrible disservice to teach them that they have a moral obligation to blind themselves to objective reality.