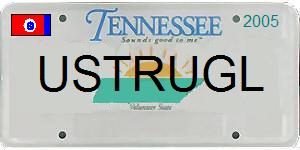 Back in Los Angeles, I enjoyed listening to Kevin and Bean on KROQ. It was there that I first learned the phrase “struggle.” When used in the present (or near-past) tense, to describe the behavior of a person, the word means “to have difficulty completing a seemingly simple or easy task.” 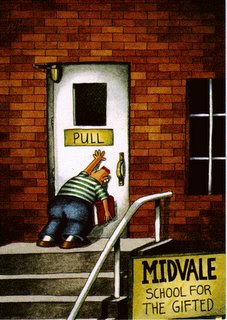 Trying to twist open that container of mayonnaise and failing, and then trying again, exerting all of your upper-body strength and again failing, and then running the lid under hot water, carefully drying off the lid, using a plastic grip tool and once again using all your might to turn the top of that lid, failing yet again, and then realizing it’s a flip-top squeeze bottle – that’s “struggling.”

Now, people all struggle from time to time, everywhere you go. Ask someone for “half a dozen” of something (other than donuts) and observe that blank look wash over their faces, that same uncomprehending look reminiscent of cows watching trains pass by the pasture, and you’ll see what I mean. But Tennesseans seem to struggle more than most people in most places I’ve been in. Still, the S.Q. (Struggler Quotient) is much higher here than pretty much any place I’ve ever been.

• The Wife recently had to wait in traffic for a woman to balance her checkbook during rush hour.

• The woman ahead of me at the Wal-Mart quick check-out lane who takes out her checkbook to buy a pack of cigarettes and has to ask whether they will take a check that is printed instead of handwritten. (Um, yes, I think they will.)

• Ask a Tennessean for directions to place “X.” You will be told “Y’all just go down to yer left, foller Kingston Pike, and turn right where Gooblefarg’s used to be. Then yer ‘bout three red lights away. Cain’t miss it.” Thanks.

• My personal favorite struggle is the “Tennessee Right Turn.” This is a traffic maneuver in which the driver, brings his or her vehicle to a complete stop, while in the flow of traffic, before beginning to turn the steering wheel to the right and apply the gas. The right-hand directional is never used. This is commonly done so the driver does not spill his or her beer while executing the dangerous right turn. The only time a Tennessean will not bring a vehicle to a near-complete stop while executing a right turn is when they are doing so at a red light. Such right-hand turns are taken at speed. So are all left-hand turns; after all, NASCAR drivers turn left without slowing down.

• On a related traffic note, the inability of Tennessee’s highway engineers to use a device commonly known as a “compass.” This is a magnet floating on a swivel, which will align itself to the Earth’s powerful magnetic field, telling the user what direction they are facing. (Brilliant!) However, the people who have laid out Tennessee’s highways lack the ability to maintain a straight line for more than about 150 yards at a time, so while on a westbound highway, one will frequently find oneself headed east-by-northeast.

• On still another traffic note, there’s downtown Knoxville. It’s not big, but it is unbelievably labyrinthe. Check out the five-way interchange on a satellite photo.

• Despite the foregoing, I’ve met lots of people who respond with fear and panic about the prospect of going to Knoxville (population: 173,890) because it’s “too urban.”

• Present a Tennessee bank with a cashier’s check for more than $1,000. The bank will put a five-day hold on the check before crediting your account.

• ATMs in Tennessee do not accept deposits. When asked why, bank officials will say, “not enough people use the ATM to make deposits, so we stopped doing that.” Huh? Did someone go into the bank and complain, “I notice that you offer other people a convenience that I don’t use personally. Please stop! It bothers me that other people are able to go about their business quickly and efficiently. Make them slow down and struggle like me, please, or I may just take my business elsewhere!”

• Leaving your manual transmission car in second gear because you’ve forgotten how to work the clutch. This makes accelerating from a stop rather challenging, and it makes going more than twenty-five miles an hour impossible.

• The guy who runs the Chevron station on Broadway and Hotel Avenue in Fountain City has a sign out front that says “No Lottery – No Beer – Not a Casino.” I’m glad you cleared that one up for me, Jack. I go up the street to the Citgo station which does have beer, does have the lottery, and get my gas there because he’s always five cents a gallon cheaper than you, and yet somehow I don’t get that Citgo station confused with a casino. I’ve been in real casinos. They have cocktail waitresses and lounge singers in real casinos, and to my knowledge, there’s none of that at the Citgo Qwickie Mart. So get off your high horse and lower your gas price to meet the market, dude.

• Most Tennesseeans see nothing wrong with using their Constitution to prohibit atheists from holding public office, even though the Constitution is self-contradictory on that point. The ban is found at Article IX, § 2, which reads: “No person who denies the being of God, or a future state of rewards and punishments, shall hold any office in the civil department of this state.” But, Article I, ¶ 4 provides that “no political or religious test, other than an oath to support the Constitution of the United States and of this state, shall ever be required as a qualification to any office or public trust under this state.” So can I hold office here or not?

• Here’s the scenario: It’s 11:45 on Sunday morning and I want to get a six-pack of Sammys to enjoy while watching the Packer game at 1:00. Since at the time we lived out at The Estate At Louisville and it was a twenty-five minute drive to Wal-Mart, I’m kind of cutting it fine. The clerk wordlessly takes the beer off the counter and sets it behind him, and rings up the rest of my purchase. “What about the beer?” I ask. “Oh, it’s Sunday. I can’t sell you that before noon.” Because it’s much more sinful to buy the beer at 11:45 a.m. than it would have been fifteen minutes later. (That was more than a year ago, but I’m still pretty bitter about this incident.)

• Local law enforcement can’t seem to get its act together about the FBI breaking up cockfighting rings.

• A quiz for Loyal Readers who are not Tennesseans: try and pronounce these place names for places around Knoxville: “Rhea County.” “Roane County.” “Cocke County.” “Blount County.” “Louisville.” “Maryville.” Here’s your Tennessee pronunciation guide: “Rhea” is pronounced “ray,” like “Sugar Ray” or “ray of light.” “Roane” is pronounced “rain,” like water falling from the sky. “Cocke” is pronounced “cock,” like a… rooster. “Blount” is pronounced “blunt,” like a slang term for a marijuana cigarette or the opposite of “pointy.” “Louisville” is not “Lou-EE-ville,” like the city in Kentucky; no, it’s “Lewisville.” And best of all is “Murrvll,” a one-syllable word used to describe the seat of Blount County. How’d you do? 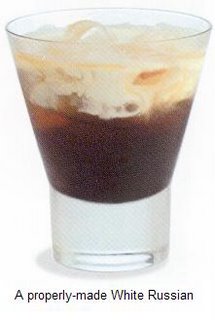 • The Wife and I went out for dinner one night and she ordered a White Russian to drink. The kid behind the bar said, “No problem,” and then leaned over to his bar-back and asked for help. He’d never heard of a drink called a “White Russian” before. Shortly afterwards, she was presented with a pint glass full of milk and ice that might have had a shot of vodka mixed in, and a shot of Kaluha floated on top of this massive and weak “cocktail.” To his credit, he got the ingredients more or less right.

• I can’t begin to think of the number of times I’ve been out to eat here and asked for a beer. When I ask what kind of beer they have, the answer is always, “Oh, just name it, we’ve got everything!” I think to myself, “I sincerely doubt that.” “Everything” means big-name American brewers and a six-pack of Newcastle Brown thrown in for variety. They’ve never heard of Bass, much less

Anchor Steam,* Sierra Nevada, or even Pete’s Wicked. They sometimes have Samuel Adams and sometimes there isn’t any in stock right now. Now, if the beer selection is limited to major brands, that’s one thing and I understand catering to your market. But don’t tell me that having Bud and Bud Light is “everything.”

• Poor white people in East Tennessee vote Republican, fly Confederate battle flags, and complain that people like me don’t know squat about history and are prejudiced against “real” Southerners – and they see no contradictions in any of this.

• Parents, called to a meeting about their childrens’ truancy from school, failed to show up.

This is not to say that there is no struggling elsewhere in the world. And sometimes I struggle along with the rest of humanity; everyone struggles sometimes. But damn, there’s a lot of it going on here. It’s a rare day when The Wife and I do not encounter strugglers. Those days are usually ones where we stay at home and don’t go out.

* To be fair, we have found a place that has Steam – on tap! It’s the Stir-Fry Café in Turkey Creek and I want to go back there just for the beer.