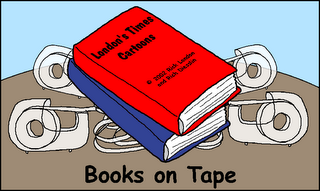 One of the lawyers at the office listens to a lot of books on tape. I’ve found them convenient to listen to while I do something on the computer, like write or goof off playing Civilization. I even bought a special tape player to sit on my desk and play these tapes while I did other things.

So, I borrowed a series of tapes of lectures about the history of England under the Tudors and the Stuarts (actually, it started with Henry IV, a Lancastrian, and is supposed to end with George I of the House of Hanover). Problem is, he only has volumes one through three of a four-volume set, so I finished off halfway through the realm of Charles II, as he is wrangling with the Cavalier Parliament for money in the midst of skepticism about Charles’ less-than-anti-Catholic foreign policies.

So I have tried to find volume four somewhere, and so far haven’t. Scouring the two local libraries, though, I found another book on tape I had been interested in reading, Rudolph Giuliani’s Leadership. I could deal with the somewhat generic and nasal voice of the narrator (Jonathan Marosz, whose nasal voice you may have heard on PBS bumpers). Tape 1 of this book on tape describes Guiliani’s experiences on September 11, 2001, which was quite dramatic — at least until I had to flip the tape.

After that, I realized one of the biggest problems with a book on tape is that the book is on a tape. Tapes are physical devices that must physically move over other moving parts, and like everything that has moving parts, things can go wrong. Tapes, in particular, are susceptible to getting stuck on moving rollers, capstans, and heads during playback, resulting in sticking, followed by bunching and jamming outside of the cassette itself. The result is tens of feet of strands of tape being pulled out of the cassette and finding its way into hidden corners of your tape deck.

I would really like to stick to CD’s for something like this. But there’s so much media out there on tape, still, that it’s hard to go down that road.

So for now I’ll have to forego listening to the rest of Rudy Guiliani’s narrative about his 9/11 experience, which so far (up to the point that WTC tower #2 came down while he was trying to get on the phone with Vice-President Cheney) was pretty interesting. I’ll have to forego learning about the attempts of the hapless James II to re-introduce Elizabethan-style religious tolerance and Queen Anne’s sad ending to the troubled reigns of her ancestors. Maybe I’ll be able to get these things at a later date, but it looks like not for a little while. 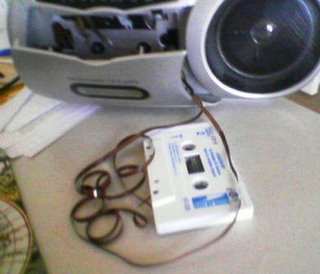 Well, I need to get back into the habit of writing regularly more than I need to be reading (or listening) regularly. I can get Guiliani’s book as a book (imagine that), hopefully soon. And I can think about getting the expansion pack for Civilization, too, although I’m not sure I need it and pretty sure I can find a better use for the thirty bucks. But I just can’t abide by more incidents like the one depicted to the right.