I came across an interesting bit of history yesterday. In the mid-eighteenth century, Princess Royal Maria Theresa Hapsburg was the only woman to ever rule her family’s imperial domains. She doesn’t get as much press in the U.S. as other royals from Enlightenment Europe because her domains were far to the East — so she didn’t get the publicity of, say, Louis XVI or George III. But she presided over a network of duchies, kingdoms, territories and countries which lacked a single name for the global unit, but which included the Holy Roman Empire and much of Eastern Europe. Her lands were collectively, larger, richer, and more populated than European Russia. She was easily the most powerful people on Earth during her lifetime. She had little formal education and somehow never absorbed the formal protocol that bound the counduct of other members of the elite, rich, and ruling classes of Europe of her time. 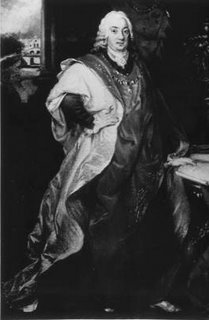 Perhaps this was why she made Emanuel Count Sylva-Tarouca, a Portuguese nobleman of exceptional intelligence and apparently remarkable diplomatic urbanity, her most important advisor. Count Tarouca’s role in the Princess Royal’s court was to serve as the Royal Critic. His job was to tell his Queen and Empress every mistake that she made, whether it related to social protocol or entering into a treaty with another country.

It is difficult indeed to imagine the level of trust that must have existed between Maria Theresa and Count Tarouca. In some ways they must have been closer than if they had been lovers. This they most certainly were not, Maria Theresa’s deep and passionately requited affection for her husband, Francis Stephen of Lorraine, ranks with John and Abigail Adams and Henry VIII and Jane Seymour as among the happiest love stories of history. But the bond between the Crown Princess and her Royal Critic must have been of adamantine strength for her to appoint the man to such a task.

In Margaret George’s historical novel of Mary Queen of Scots, she suggests that Queen Mary’s close advisor, David Riccio, also held such a position. The close bond between those two characters was portrayed as a motive for Mary’s deranged husband, Lord Darnley, to abduct and kill him in front of the Queen and to serve as motive for the Queen to become complicit in Darnley’s ultimate demise. But that is a different story. The point is that a person whose job it is to point out your flaws and weaknesses and mistakes has to be someone who trusts you implicitly to not take the criticisms as insults, particularly when you literally hold the power of life and death over them. And it has to be someone you trust implicitly to always have your true best interests at heart, and to always have a level head with clear thought and wisdom, no matter what.

It is too bad that modern political life lacks figures like Count Tarouca. How much better a President would George Bush be if he had such a person within his inner circle of advisors? What kind of a position would our country have been in had such a position existed, and had the President listened to the criticism? If Gray Davis had had such a person, would he still be Governor of California? If someone had filled this role for Bill Clinton, would he have been literally caught with his pants down in the Oval Office and left with a stained legacy on an otherwise-successful Presidency? We’ll never know, because our political process results in our leaders being surrounded by bland affirmers, lackeys, sycophants, and representatives of coalitions rather than by those whose wisdom and loyalty are both such that they can criticize without fear of reprisal.

People need criticism to improve. Maria Theresa was in a position to suborn much of Europe to her ego; she ruled much of Europe and was respected, loved, and feared everywhere. But rather than proceed like a singular figure charting her own course through history (like, say, Napoleon), she instead gave someone the job of constantly criticizing her and put him as close to her as anyone in her court. Make no mistake, she was still a Queen and she still exercised one-woman rule over millions of people. But appointing a Royal Critic is about the most enlightened thing I can think I have ever heard of any ruler doing.