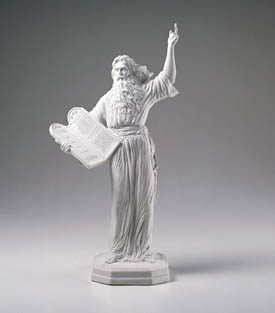 A friend from Tennessee writes:

Right now we have an interesting problem in Cumberland County. Someone has placed a truly awful piece of chainsaw art – Moses and the 10 C’s – on the sidewalk in front of the county building. As far as anyone can tell the county did not give permission for the placement but everyone’s too scared to remove it. It certainly does not pass constitutional muster because it lacks the name of the placing organization and a notice that the government does not indorse it. I’ve explained this in a letter to the editor of the local paper some weeks ago.

I intend to contact the ACLU for legal advice about my proposed course of action. I intend to deliver the statue to the police department, claiming I’m turning in lost or abandoned property. I’d like some other ideas that may be better. I’ve considered bringing it to the recycling center and may do so if the police return it to the county building. Any thoughts?

As I see it, the government can’t help it if somebody puts a statue like this on public property. But if the responsible authorities don’t remove it in a reasonably timely fashion, then they can fairly be seen to be endorsing its message. While perhaps the “10 C’s” (particularly the last 6 or 7) are not bad at all, they are also explicitly religious (especially the first 3 or 4). Non-Christians (and non-Jews) would look at the statue and think, “That building isn’t for me.” And no American should feel that way about their governmental institutions.