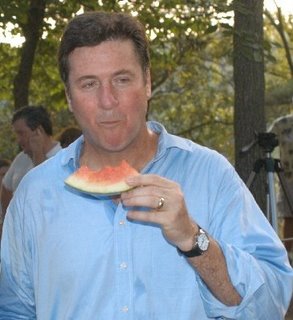 Formerly the great hope of the religious right for President in 2008, Senator George Allen appears to have fatally wounded his own Senate re-election candidacy through incautious use of racial slurs. He called an Indian-American observer of his campaign a “macaca,” which turns out to be the name of a particular kind of monkey. Now, there are rumors of more overt kinds of racist attitudes, although Allen vociferously denies them and I should be fair to Senator Allen and emphasize that these are only rumors.

It’s certainly a good thing that the use of this kind of questionable language is unacceptable. It’s odd, though, that he could have come so far with these kinds of things floating around about his past and his apparent attitude.

In any event, it looks like the more religiously-inclined members of the GOP will need to find a new darling. This guy’s damaged goods. In the meantime, we’ve already heard the worst about my favorite possibility — shacked up with his girlfriend in Gracie Mansion and later the house of some of his gay friends before his divorce was final. But no one has ever whispered a word that he’s a racist, and having a girlfriend while separated from his wife while a divorce was still pending is certainly no worse than a lot of respectable Southern Baptist ministers have done themselves.