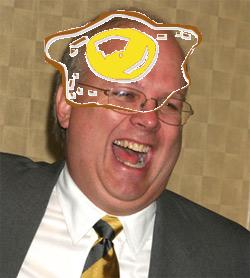 Karl Rove and his incredible Republican Turnout Machine have some big-time egg on their faces. And I’m to blame. Well, sort of. And only partially.

I think that the better-than-I-expected Democratic results — they’ve taken the House and, as I write, are leading in the three remaining contested Senate races, which would give them a one-seat majority in the Senate — have two causes:

1. A lot of people, myself included, have grown disgusted with the lack of any kind of discernable progress in the war. Every time the news comes on, it seems that something new and awful has happened in Iraq; Afghanistan is slipping; there appears to be no way out and no solution that is even marginally to our advantage. This has taken away the Republicans’ credibility on the issue of national security and terrorism — whatever mandate they might have had to lead on that issue has evaporated. This does not translate into a Democratic mandate — just a rejection of the path that we are on right now and a demand for change.

2. A lot of Republicans, myself included, have grown disgusted with the lack of any kind of fiscal restraint on the part of a don’t-tax-but-spend-anyway Congress. It’s astonishing that Democrats have gained greater credibility with the issue of the economy and the role of the government in the economy. But that’s what’s happened, because the Republicans as a group have simply abdicated the role of guardians of the Federal budget.

I cannot help but think that if Republicans had found room for a more libertarian-oriented agenda, or even one that was simply more more budget-conscious, they could have avoided this. Libertarians would have counseled more caution in starting a ludicrously expensive war; and objected strenuously to increasing spending without increased taxes to offset them (while preferring to do neither).

We’ll never know for sure, of course. But you want proof? Look at Montana — if the Republicans had kept the libertarian vote, would that have made the difference? In Missouri, if you add half the votes for the libertarian candidate to Jim Talent’s vote total, and the Senate would have stayed in Republican hands.

But no. “Libertarian budget hawks aren’t part of the “base,” so screw them and the things they want. Besides, who are they going to vote for anyway, the Democrats? Gimme a break.” Does that little mantra sound familiar to anyone?

Think about that for the next couple of years, Karl.