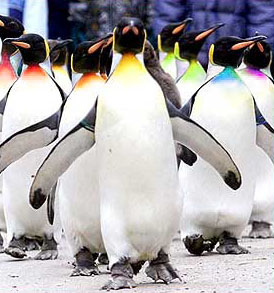 Once upon a time (well, actually just a few years ago), two male penguins — the father and another male named Roy and Silo by the zookeepers — were observed trying to “hatch” a rock with, obviously, no results. Now, penguins can only care for and raise one chick at a time, and another mixed-gender pair of penguins had fertilized two eggs. So the zookeepers took one of those eggs and give it to Roy and Silo. The two males successfully hatched and raised the chick, a female named Tango, with no help from any female penguin.

Someone wrote a children’s book about this, called “And Tango Makes Three.” The book won many awards for children’s books and, like a lot of children’s books, hit the shelves of libraries around the country. Recently in Shiloh, Illinois (a rural exurb of St. Louis), a woman checked out and started reading the book to her son, and stopped when she realized that it was about a same-sex couple raising a child. She and a group of other local parents want the book removed from the children’s section of the library. They think the book raises mature themes to which young children are not yet ready to be exposed.

This is really silly. It anthropomorphizes the penguins to a degree that is neither deserved nor logical. This is something that happens in nature, not in human society. Are we to conceal the fact that certain species of frogs can change gender when under environmental stress, just because some people disapprove of transsexuals? This imputes some degree of moral relevance to what animals do. Animals, however, are not moral actors and what an animal does has no moral significance.

One thing that seems likely to be going on here is that people who condemn human homosexuality do not want to admit that they are trying to justify their condemnation on some sort of “objective” ground — rather than admitting that they subscribe to that belief based solely on their religious objections, they claim that homosexual behavior is somehow unnatural. So when similar behavior is observed in creatures other than humans, that becomes something of a problem — and this sort of behavior is observed in a great many different species.

I suspect that most kids are capable of handling a lot more information than many adults seem willing to give them credit for. Most people would agree that cannibalism is morally bad in humans but that some animals are cannibalistic and that is simply nature at work. Kids can handle this truth. Perhaps the truth need not be depicted in as lurid or graphic a fashion as it is for adults, but that doesn’t mean that the truth is something that kids should be concealed from. And the truth is that homosexual behavior, including sex and parenting, exists in nature. Acknowledging this fact does not mean that a parent cannot incorporate the moral teachings of his or her religion along with telling the child what is going on.

Now, I haven’t read “And Tango Makes Three.” I know that children’s books sometimes anthropomorposize animals, and if this book does that, there may well be a subtext here that suggests that human homosexuals can raise children the same as human heterosexuals. Of course, homosexual couples can and actually do raise children in real life. Why it should be a surprise that a homosexual couple would do any of the same sorts of things that a heterosexual couple would (like, for instance, getting divorced after marrying earlier in life) is a mystery to me.

My point is that this is a lot of anger and concern resulting from people not minding their own business (by being upset when gay people want the same sorts of things straight people take for granted) and trying to impose their religious values on people who disagree with them in an authoritarian fashion. When these sorts get seeking some sort of justification for doing so — and in the process finding themselves confronted with objective facts which, most unpleasantly, deprive them of justifications for their points of view and expose the irrationality of their prejudices.

Gay penguins raise chicks. I think the story about two male penguins raising a chick together is kind of cute and presented in an age-appropriate way, it seems like it would make a fine children’s story. But whether you agree or disagree with me on that point, hiding your head in the sand when faced with an unpleasant fact is not a good coping mechanism. And, since this sort of behavior does manifest itself in non-human species, please dispense with the phrase “crime against nature.”