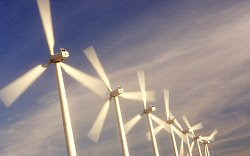 It gets windy in the desert, and tonight it’s especially so. The National Weather Service issued a strong wind advisory for the Antelope Valley tonight. In the western portions of our little triangular slice of desert, places like Antelope Acres, gusts of up to 75 miles an hour are predicted. 75 miles an hour, by the way, is what meterologists call “hurricane-force” winds.

Out here near the Rented Mansion In The Desert, the winds are steady at about 20, with gusts of up to 34 miles an hour so far tonight, although it appears that the winds will peak in about three hours or so. I’ve moved the barbeque and the greenwaste bin to areas where they won’t be blown over, but aside from that, there isn’t much we can do about it but keep all the windows shut. The dogs sure don’t want to be outside and I don’t blame them.

The wind farm in Mojave is probably shut down — if the turbines run too hard, that burns out the generators. That’s kind of ironic, if you ask me. More wind should mean more electricity, but I guess there’s a point that the mechanical parts just can’t handle the stress anymore.