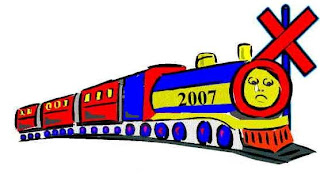 It seems that the massive infrastructure improvements that Governor Schwarzenegger has suggested are going to completely fill out the state’s capacity to issue bonds. As a result, a planned high-speed rail connection between Los Angeles and San Francisco, which for some reason would have had a stop in Palmdale, will not happen.

Now, I’ve been hearing local boosters tell tall tales about the train coming through Palmdale since before I was a teenager. Back in the 80’s, it was a high-speed rail connection between Los Angeles and Las Vegas. This does not survive geographic analysis — it would be faster, shorter, and therefore cheaper to build the train route through San Bernardino and Victorville than through Palmdale. To make matters worse, Amtrak discontinued train service from Los Angeles to Las Vegas in the early 90’s, for lack of ridership. When Amtrak stops service for lack of ridership, you know there was a problem with people not wanting to go to Vegas on a train.

Local political leaders still like the idea of high-speed rail, but only a connection from this part of the world to Los Angeles. There is a regular rail connection now, and it seems to gather enough ridership to be continued. This makes sense locally; a great many people in this area, particularly in Palmdale, commute to work in the Los Angeles area daily. A high-speed connection would make rail travel more attractive to commuters and relieve congestion on the far-overburdened Antelope Valley Freeway.

But it doesn’t make sense from the other side — are there enough riders, and enough fares to be generated, to support such an expensive task? Probably not. And since the Antelope Valley is the ass end of civilization as far as most Angelenos are concerned, why should they go out of their way to ship a bunch of hicks stinking of dead sagebrush to their pleasant and sophisticated communities like Beverly Hills, Manhattan Beach, and Pasadena? Much less all the way to Union Square, the Marina, and the Presidio. Dream on, desert dwellers.

I’ve seen how well high-speed rail can work in Europe, particularly in Germany. I’m not a naysayer who believes that Americans are so fundamentally different from Europeans that we will never get on board with a sophisticated rail transport system, although the difficulties involved in creating one where there is already a substantial network of roads for personal vehicle travel are considerable. But neither am I a messianic rail enthusiast; even the sophisticated mass transit system of Europe has not eliminated traffic jams, air pollution, or dependency on petroleum. It’s a relief for some of these things, but not a solution.

One thing I want to know is, why did anyone here think that a high-speed rail connection from Los Angeles to San Francisco would go through Palmdale in the first place? My only guess would be so that the rail connection can move up through the central valley, roughly following the route of Interstate 5. Perhaps that’s better from an engineering point of view. But it seems a little out of the way — wouldn’t the more direct route be to go through Santa Clarita, following the 5 all the way to either Dublin or Hollister on the way to the ultimate destination? Yes, the steep descent at the Grapevine would be an issue, but one that it seems competent engineers would be able to overcome. For instance, many tunnels more than twenty kilometers long, some more than a century old, can be found in Europe and Japan. A tunnel underneath the Grapevine would be well within modern engineering capabilities.

But, it’s not going to happen for at least another generation; we’re fixing our roads instead. So, no train for Palmdale. Maybe no train at all. That’s nothing new.