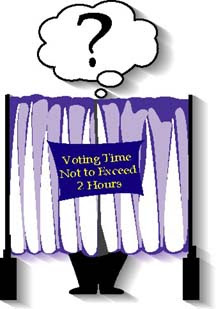 Further to a comment made earlier by my good buddy Salsola, it looks more likely that California will change the date of its Presidential primary from June to February. This would dramatically shift the dynamics of the Presidential nomination process.

As it stands now, the first delegates up for grabs will be in Iowa, then Nevada, New Hampshire, and South Carolina. Nevada’s early place in the process is relatively new. After that, traditionally, comes “Super Tuesday,” an amalgamation of about ten states, mostly but not exclusively in the South, and then a series of primaries. California’s has traditionally been last, or close to it, in the process, meaning that for recent memory, each party’s nominee has clinched the nomination prior to California’s primary, meaning that California is effectively without a direct vote in the nomination process. Instead, California’s role has been to be the political ATM — candidates come here to raise money and spend it to attract votes elsewhere.

Governor Schwarzenegger’s proposal would change that. Indeed, California’s primary would be more important than “Super Tuesday,” both because it comes earlier in the process and because it combines the money with the votes. It would also tilt both parties’ primaries to the left. For that reason, moderate or centrist Republicans would benefit, at the expense of harder-right choices. At the same time, more progressive Democrats would benefit at the expense of the DLC crowd. If the format for the primary is “winner-take-all” (meaning that all of California’s delegates would be pledged to the plurality selection) this effect would be magnified.

If this happens, it is a big boost to Guiliani, the most moderate of the significant candidates. John McCain cannot, I would think, take California because of his pro-life stance. Mitt Romney would also have difficulty based on his courtship of religious voters.

On the Democratic side, it looks to me like it breaks in favor of Hillary Rodham Clinton at the expense of John Edwards and Barack Obama. Both Edwards and Obama have been at pains to paint themselves as centrists, but Clinton still labors under the reputation of being an unabashed liberal. She actually has tried to defeat that reputation during her tenure in the Senate and would like to portray herself as a moderate. I don’t think she’s been very successful.

So, this would set up a Guiliani versus Clinton matchup. Right now, Guiliani would seemingly win such a contest handily (354 electoral votes to 184), but it’s a long way between now and November of 2008.