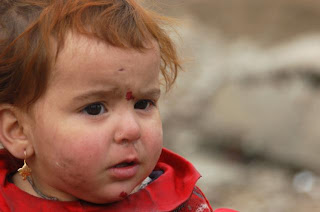 That is a picture of a refugee from Taliban warfare in Afghanistan. This is a letter from my friend who is on duty in Kabul. I normally would not include his name but he has offered this letter for publication in a variety of newspapers, so he has manifested a desire that the letter be circulated to the public.

Let’s Not Have Another Forgotten War.

I guess that it is more important to speculate as to whom the target might have been at the front gates of the Bagram Airport in Afghanistan versus what is really happening in this country. I am certainly happy that our Vice-President was not injured and of course it is always sad when so many are killed or injured.

The recent explosion on February 27 at the largest Afghanistan airport received an immense about of international press, due mostly because the Vice-President of the United States was in the vicinity. I am an Infantry Colonel serving in Afghanistan and I am disheartened to rarely hear in the news of the other plights befalling the peoples of Afghanistan. I understand why Iraq receives most of the news coverage. It has more political interest.

That fact of the matter is in Afghanistan the Taliban has the most presence of the two countries. If we keep saying that the good Muslims of the world are not our enemy, but the ‘militant’ Islamists are the true enemy, then who is more militant than the Taliban?

In Afghanistan the Coalition Forces are trying to rebuild a country that was totally devastated by years of invasions, wars, natural disasters and the Taliban rule. This country is land locked, has very little useful farm land and very limited natural resources. Almost everything used in this country must be imported.

Afghanistan, with its almost impassable mountains, was created many years ago to be a buffer state between Russia and the British ruled India. It was inhabited mostly by invaders who were crossing through it on their way to attack other countries. The peoples here are very tribal. Many of the daily activities look the same now as they did in the 14th Century. Afghans carry water from polluted rivers, ride horse drawn carts, and use crude tools with which to farm.

The children I see here are constantly covered in dirt. They cannot wash for weeks at a time. There is very little drinkable water, much less running water. When you look at the faces of teenagers you see the scares from bug bites and years of infected cuts. Added to that is the terrible cold wind at night and the brutal heat during the day. The unsanitary conditions here make the children look much older then actually they are. Their physical size is also deceiving. Because of the lack of good nutrition they are very much underdeveloped. And then there are the thousands of Russian landmines. They are everywhere. You see many Afghans who are mputees; victims of these landmines. Everyday we hear about explosions from either suicide bombers or landmines.

This is a country that has an average lifespan of only 43 years. That means that there are very few grandparents here. Can you imagine that when you graduated from college you parents would have already passed away? That is the situation here.

And now the Taliban is coming back and attempting to disrupt the reconstruction efforts provided by the international community. The Taliban knows, as did the Viet Cong, that you cannot defeat the American military on the battlefield. If you want the Americans to leave you must defeat them in the court of public opinion. The Taliban is attempting to just that by using suicide bombers. It is important to them to get as much publicity as possible.

For the uninformed, when violence occurs against the Coalition, the Taliban trumps it as a sign of weakness. When, in truth, the fact that a suicide bomber can come so close is actually a sign of compassion on the part of Coalition Forces. The Taliban uses all sorts of ruses to get close. They fake accidents, injuries, use children, and even animals. They play on the Western mentality towards helping their fellow man.

So violence gets the better press. A picture of a bunch of Afghanistan children reading for the first time won’t be on the front page of a newspaper. The press does not generally cover the literacy program conducted by the Coalition, the thousands of schools that have been built (although the Taliban has damaged over 400 of them already), the education of females and the generally improved health environment within this country.

If the security in Afghanistan was better then the reconstruction would go faster and the people would have a higher standard of living. And maybe the child in the refugee camp might actually live long enough to be able to learn to read or even be a grandparent.

This is my third war. Soldiers do not do this for the press coverage; we do it for that child. The public can forget about the war here, but do not forget the Afghan children.