Another heartbreaking letter from my friend, serving in Afghanistan:

Serving in a combat zone we sometimes forget the true casualties of war. Certainly the comrades that I have lost over here in Afghanistan come to mind. In fact, they never leave your thoughts. But the ones who suffer day in and day out are the refugees.
I was fortunate enough to visit (although briefly) a refugee camp in Kabul , Afghanistan just the other day. I hesitate to describe exactly where the camp is since the Taliban like to attack anyplace where the international community is providing support. In fact, just to drop off relief supplies we had to travel in a well guarded convoy.
This particular camp housed 200 families with a total population of about 500 people. These refugees are people who fled to Pakistan and Iran during the many years of war in Afghanistan . They left behind everything. All of which was eventually lost. They have no land, no jobs, and hardly any clothes. And more importantly, they have no families left to whom they can return.
These refugees subsist purely on donations. Many wear clothing donated by Americans. Their living conditions are terrible. No running water and only outside bathrooms. Their one building, where they all live, is nothing more than a bombed out shell. Some windows are missing and there are very few working doors.
The sanitation environment is horrible. There is a drainage ditch that runs right through the middle of the camp that is nothing more than an open cesspool. Disease runs rampant throughout the camp. Diseases such as tuberculosis are common here. The average lifespan in Afghanistan is 43 years old. In this camp it is less. The common cold can be fatal in an environment like this.
When we arrived I noticed one little girl who was very shy. She stood away from the others and would not participate in any group activities. It took a long while of being patient and letting her find her own timing and space, but finally we became friends. 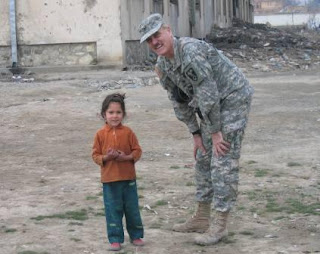 She turned out to be very sweet. She has a smile that would melt anyone. She told me about her dream to someday leave this camp. But for now she must live in this nightmare.
Why any military would want to inflict pain and suffering on someone like this little girl is beyond comprehension.
But war does that.

I’m proud that we have people like my friend serving our country in this way. The great thing is, even in the face of such terrible conditions and some of the most deplorable behavior human beings are capable of, his optimism, compassion, humanity, and resolve show through — and in those respects, he is just like pretty much all of the other men and women serving in the military alongside him. These people are representing the best our country has to offer and I’m confident that they all have the ability to win hearts and minds, just like my friend is doing.

I truly hope we can give that adorable little girl, and indeed all of the children her age in that eternal battleground of a nation, some measure of peace and hope one day. We need to clear out the bad guys for that to happen. As long as the Taliban is active and powerful enough to threaten innocent civilians like this little girl for having the temerity to accept charity from Westerners, we haven’t yet completed that mission.

We can’t make the Afghans rich or powerful, but we can give them the opportunity to build their own country and help them keep it peaceful and under the rule of law. The obstacle to doing that is a bunch of bad guys that many Americans assumed, incorrectly, were wiped off the planet five years ago. Unfortunately, it’s not so, which is why that little girl has to live in the squalor my friend describes.