Imagine this. The Iranian Navy sends a boat out from its far-western port of Bandar-e Mahshahr to patrol against smugglers. The boat finds a Saudi-flagged ship it does not recognize in their territorial waters, and sends over a boarding party to inspect the cargo. Then, the USS Bataan enters Iranian seas, seizes the Iranian inspection craft, and arrests the Iranian sailors. Then, it sails back into international waters. The U.S. insists that the Saudi ship was in Iraqi waters and that the Iranians appeared to have “accidentally” boarded it, but that the captain of the Bataan couldn’t be quite sure that the Iranians weren’t trying to engage in some act of sabotage.

Would you consider this to be an act of war by the U.S. against Iran? Would you not expect the entire world to be howling in outraged protest against this act of naked, barefaced American aggression? Of course you would. And if the U.S. published two sets of locations indicating where there seizure took place, the first one being clearly within Iranian territory, you would say that the U.S. military are not only liars, but bad liars at that, and expect even greater outrage from world opinion.

But sometimes, the U.S. and in this case, one of its allies, are the victims of treatment like this. In real life, it’s our good friends in the UK who have to deal with the situation. And it’s outrageous. 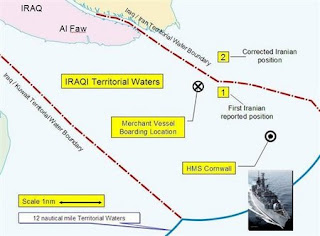 The exact geographic coordinates of the location at which the fifteen British sailors and marines were taken by Iran is 29° 50’ 36” north, 48° 43’ 8” east. The map to the right, produced by the British Ministry of Defence (note the delightfully British spelling of that word), illustrates the two locations that the Iranian government has given for where they say they took the sailors. “In Iranian waters,” my ass. The British had every legal right to be in Iraqi waters and conduct coastal defense operations there, including inspecting Indian-flagged cargo ships for contraband – which is what these sailors were doing when the Iranians arrested them.

Now, riddle me this. If the Iranian government is so convinced that this so-called invasion of their territorial waters was an “accident,” why don’t they condemn the clumsy navigation of the British sailors and let them go? An accident is obviously not an act of war, it is by definition something done unintentionally. So why hold fifteen sailors hostage until their government admits that they made a mistake? (Which they didn’t, but that’s beside the point now, isn’t it?)

I realize that we Americans are not in the best position possible to provide guidance about getting Iran to release hostages. And let’s not forget, Iran’s President Ahmadinejad knows a thing or two about the value of taking western hostages. But unlike 1979, both the US and the UK do have basically all of our military right across the Shatt al-Arab.

I realize that the U.N. Security Council today expressed “grave concerns” with the situation, but somehow, that does not satisfy. What’s the U.N. going to do to Iran? Sanction Iran some more? Ooooh. Ahmadinejad’s gotta be shitting himself now.

I realize that diplomatic solutions must be used to resolve disputes before military force is undertaken. The UK Government is right to try and use talk and legal pressure to get their people released first.

And finally, I realize that we need to tread with great caution with respect to Iran, which is a powerful, wealthy, and sophisticated nation and one which has complex internal dynamics of its own which are even less well-understood to us now than those of Iraq were in 2003. I understand that a good argument can be made that this is exactly how we got into the mess we are in right now and we should proceed cautiously. And I accept that argument’s validity.

But a big part of me wants to see the Iranian government taught that Jimmy Carter isn’t calling the shots any more.