Springtime has arrived in the desert, and with it came the beloved cherry blossoms and (allegedly) the flowering of the California poppies. We are starting to see temperatures in the eighties — that is, when we aren’t experiencing week-long windstorms. And along with the coming of spring we have had some new house guests.

The common black cricket is, frankly, an icky-looking bug. I have no love of him for that reason, although I realize he is harmless. His chirpy mating call is thought in many cultures to portend good luck of some sort — an imminent pregnancy, an unexpected source of money, and so on — but I’ve no such illusions. He’s come in the house to look for shelter from the snakes, mice, and birds that feast upon him and his friends out in the desert fields, and if he is really a “she” who has just mated, she is looking for a safe place to deposit her fertilized eggs so that there can one day soon be hundreds of little crickets just like her. 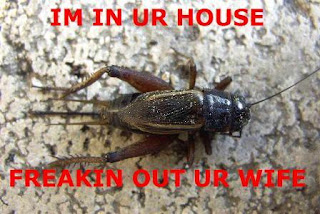 Our first cricket invader was spotted by The Wife, who adopted a heightened tone in her voice and asked me to come take care of the “Gigantic icky bug I hope it’s not a roach tell me it’s not a roach!” She freaks out about bugs.

I took a look at the creature — obviously not a roach with his big grasshopper-like legs, but I could see how she might think that because the cricket does have really long, droopy antennae. I remembered all the crickets chirping in the ice plant and juniper bushes near the house where I grew up. “Oh, it’s a cricket,” I said, “He won’t hurt anything, but he’s tough to catch.”

And they are. I found another one, a much bigger one, yesterday on the stairs. I tried to get him in a paper towel but he kept on jumping away from me. Then I tried to get the cats to come and play with the creature, figuring it would be great fun to see them figure out such a thing. Both the cats ran away from me, apparently afraid that I would kennel them. The dogs were completely useless and aren’t good for that kind of play anyway. So I vacuumed up our cricket guest and he’s lived inside the vacuum cannister with all the dusty pet fur ever since.

We are quite likely to have several more cricket invasions over the next several weeks. No house is ever sealed up from the outside world (not if it wants air conditioning and working toilets, anyway) so this sort of thing is just going to happen. But relax, my lovely wife, these are not roaches even if they are icky looking. Hopefully they don’t come in and start their chirpy, loud, and ultimately annoying songs while we’re trying to sleep.