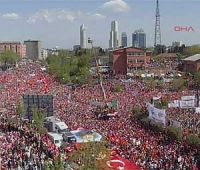 A country was founded as a strictly secular state with a Constitution that requires that the government be strictly non-religious. It is poised on the brink of nominating its first religious observant President. The army obviously has serious reservations and there is a massive rally of secular people demanding that the apparent nominee make a pledge to adhere to the secular Constitution. That’s what’s happening in Turkey, right now.

Seems a contrast from the United States, where most of the major politicians are running towards religion.