Yesterday The Wife and I rode with some friends in their RV out to Las Vegas, so The Wife could compete in the speech contest and tell her tall tale. She did very well in the competition, but it was a home-town crowd and with one exception, all Vegas people won. Not much you can do about being home-towned; it was a big weekend and it is very inconvenient for people from California to get to Las Vegas, especially on short notice for a holiday weekend and particularly when there is a big event going on.

The RV was a good way to go — in part because I didn’t have to drive it. The Wife and one of our friends sat in back and chatted the whole way out, while us menfolk sat up in the cab and spoke. 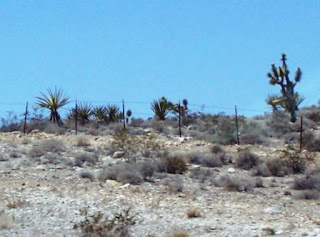 One thing we noticed was that the Joshua trees seem to come in two varieties out in Nevada; there are the relatively narrow-branched kind we’re familiar with in the Antelope Valley, and another kind with shorter trunks and wider leaf-spikes crowning their tops. I found an example of the two varieties next to each other.

I can’t speak too highly of the Crestwood Suites on the South Strip. About the best adjective I can think of would be “adequate.” But there isn’t a lot you can do on short notice. The days of plentiful, quality rooms in casino hotels available for cheap are gone forever, I think; most of the big hotels are going to give you a runaround and tell you that they’re sold out for the weekend you want to be there. 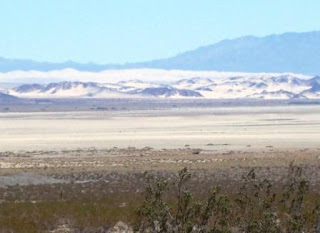 Now, there is a whole lot of nothing out on I-15 between Barstow and Las Vegas. Empty road, bleak, Martian-looking mountains, and dry lakebeds. It’s particularly not fun to drive in heavy traffic on the way back on Sunday, which is one of the reasons why I was very happy to not be doing the driving myself. Right about the time we got to world-famous trivia answer 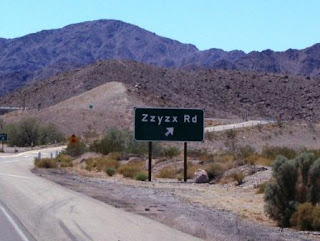 Zzyzx Road, we hit twenty miles of heavy traffic, caused by a bad accident in which a BMW flipped over into the median. I saw two civilian-looking guys walking around the wreck, who I took to be the driver and passenger, so it looks like they walked away, but the car was a twisted hunk of metal barely recognizable as a Bimmer. It reminded me of why I liked my old BMW so much — besides being a fun car to drive, I could have confidence that it would be safe if the worst happened. 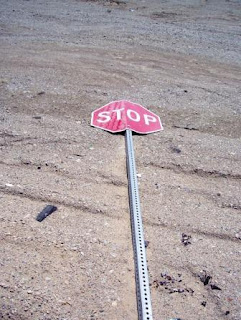 We dropped a lot more money in the outlet mall than I did in the casino. At least we have something to show for that. I would have liked to have seen a show — Penn & Teller, maybe, or one of the Cirque du Soleil shows that are up and down the Strip — but The Wife didn’t want to go out at all, and she did have to get up really early to make it to her competition.

So, I didn’t do very much gambling — I lost eighty dollars in a few short rolls of craps while waiting for The Wife’s event to start this morning. I need to remember to never play on Sunday, even if I hadn’t played previously on Saturday. I wouldn’t have played at all if it weren’t for the fact that Toastmasters events always start late. When I tried to get in the room to talk to The Wife rather than just hang out and sit on the couch with nothing to do for the two hours it took these people to get their shit together, some guy blocked me from entering the room and told me, “You have to leave.” So I did, and sat around with no coffee next to a bored osteopath from the meeting next door, feeling unwelcome.

That’s not to say the weekend was a total loss. I got a few new shirts and some cooking toys from our excursion to the Vegas outlet mall. I got to see The Wife give her speech and it’s important to me to go support her for a big event like this. We got to hang out with some friends and I didn’t have to drive. I suppose had I won this morning I would have enjoyed the gambling more.