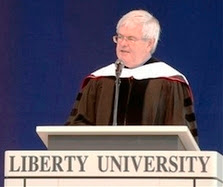 Speaking at the commencement address of Liberty University yesterday, Newt Gingrich took direct aim at secular Americans and their role in the public life of America:

A growing culture of radical secularism declares that the nation cannot profess the truths on which it was founded. We are told that our public schools can no longer invoke the creator, nor proclaim the natural law nor profess the God-given quality of human rights. In hostility to American history, the radical secularists insist that religious belief is inherently divisive and that public debate can only proceed on secular terms.

Where to begin responding?

I. Who is Attacking Whom?

First of all, I know of no secularist, humanist, atheist, agnostic, freethinker, or rationalist who has seriously proposed preventing people from proselytizing their religious beliefs. Some propose to respond to such evangelizing with a counter-message of the virtues of secularism or a criticism of religion, but this is not the same thing as restricting the rights of the religious to be faithful and to seek converts to their faith. If Islam can be criticized (as it certainly can and should be), so can Christianity, Judaism, or religious belief in general.

Yes, secularists and atheists have asserted themselves more assertively over the past several years than they had before. But it’s not like religious people are an oppressed minority in this country. Far from it, and Newt knows it. Otherwise, he would not be making an appeal for the support of religious people in what is surely the buildup to his campaign for President. No one, as far as I can tell, is making an appeal to secular voters.

II. What Are The Truths on Which America Was Founded?

Gingrich, who is himself an historian, should know better than to imply that the “truths upon which America was founded” are religious in nature. He should know very, very well that the enlightenment ideas of individual liberty were formulated by Deists and atheists in France and England; he should know very, very well that these ideals arose out of political philosophy rather than theology. He should also know well the nature of the kinds of societies created by European theocrats and their scant regard for human rights.

On this very blog, the role of religion amongst the Founders has been raised on multiple occasions and I know I will need to re-address that point here. So here, in full, are the references to the supernatural found in all of America’s organic documents:

The Declaration of Independence contains three debatable references to God:

“…the separate and equal station to which the Laws of Nature and of Nature’s God entitle them, a decent respect to the opinions of mankind requires that they should…”

“…all men are created equal, that they are endowed by their Creator with certain unalienable Rights, that among these are Life, Liberty and the pursuit of Happiness.”

If you want to see “Jehovah” as the subject of these references, you certainly are free to do so. But I’d suggest that looking instead for a passive Creator, a divine watchmaker who does not participate in human affairs, that would be a better fit. Certainly Jefferson could have made a more direct reference to a diety than these oblique code words. As we’ve debated before, Jefferson was no believer in the Christian religion.

The Declaration of Independence is 1,337 words long — long enough that if it were reprinted in full on this blog, I would endure criticism for “writing another novel.” Such criticism calls to mind a fable about Mozart, who was accused of putting “too many notes” in his music. This post, by contrast, is 1,603 words.

Old Tom, though, was unconcerned with issues of verbosity; he was trying to accomplish a significant political objective and would use as many or as few words as were necessary to do what needed to be done. So of the 1,337 words picked by Jefferson, exactly thirteen of them — just under 1% — contain even the most oblique references to God.

In the Constitution, we find no references to God. At all.

The closest the Constitution comes is in the date of the original portion of the document: “Done in Convention by the Unanimous Consent of the States present the Seventeenth Day of September in the Year of our Lord one thousand seven hundred and Eighty seven and of the Independence of the United States of America the Twelfth.” This is merely an invocation of the common system of numbering years sequentially pursuant to European custom and is in no way an invocation of or reference to the diety — and an entirely secular, historical alternative to the religious-based year dating mechanism is immediately suggested.

The truths upon which America was founded were the truths of liberal philosophy, which are of the supremacy of individual human rights and divided, democratically-based government. America was created not to create an environment where Protestant Christianity could flourish, but rather one in which there would be no taxation without representation. At best, with respect to religion, America was created and founded so that people could practice whatever kind of religion they saw fit — including none at all — without interference by a governmental authority. But this was a mere sidelight compared with the question of the extension of the franchise to the people who lived in the American colonies, and the political philosophies that motivated their elites.

If religious belief were not divisive, intelligent, educated young men and women in the middle east would not think it was a good idea to enter crowded marketplaces and blow themselves up, hoping to take as many people of different faiths (or sects within the same faith) along with them as possible. Nor would their deaths be celebrated by their families and co-religionists.

This is not to say that people of differing religions cannot work together peacefully; it does mean, though, that they must pick and choose which portions of their religion they will follow. Perhaps you think I should be stoned to death for being an open atheist. If you do not, and you claim to be a Christian or a Jew, you are ignoring the explicit command of Jehovah in, for instance, Deuteronomy 17:12, and therefore you are picking and choosing the portions of the Bible you want to obey and those that you prefer to ignore. I’m glad you are making that choice, by the way.

IV. Must Public Debate Be Secular?

Yes, public debate ought to be secular, because public debate is about public issues, which affect everyone and which are not about religion. The government and the various churches and other bodies of worship in this country are different things.

Now, many people are religious. And their religions inform their morality. I suggest, politely, that reference to a deity is generally an unnecessary step in deciding whether something is right or wrong — and I risk being attacked as a “radical secularist.” But let’s leave that aside. The question is whether someone engaged in public debate must necessary dispense with their religion, and of course that is not the case. If your religion informs your sense of what is right and wrong, then setting that aside is functionally impossible, and not desirable. No secularist I know of seriously suggests that people should dispense with issues of morality when engaged in discussion of a public issue. Many secularists suggest that religion is used to arbitrarily gloss over an otherwise-deficient moral choice, or that the dictates of various holy works and religious concepts are so flexible and ambiguous as to really be of no use at all. But that is different than saying religion does not belong in the public square.

What I object to is my tax dollars being used to support someone else’s religion. If the government subsidized construction of a mosque, you’d likely be upset. Why would you not be similarly upset when the government subsidizes construction of a church? Religion is a private matter and private money should be used to support it. Do religious activists have a right to proselytize? Of course; and they should have the same ability to access a public forum as anyone else to do it.

V. What About President Gingrich?

Suffice to say that I am now horrified by the thought of a President Gingrich — Gingrich is positioning himself to be the second coming of the existing administration and its cozying-up attitude to millennialist Protestantism. I ought to be excited by the idea of Newt Gingrich playing a role in future administrations — he’s a persuasive speaker, an intelligent and original thinker, and a great creative force for American politics. But if he’s going to spend his campaign making himself the mouthpiece for the Southern Baptist Convention, he’s going to have to look elsewhere than this secular Republican for support.