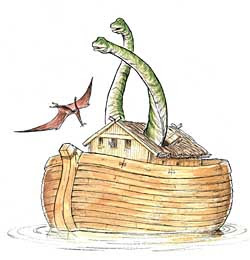 The day after tomorrow, a museum will open up in northern Kentucky, in the metro-Cincinnati area. The museum is dedicated to the proposition that “The Bible is true from Genesis to Revelation!” and therefore it depicts the story of Genesis (which, it contends, took place over the course of six days just over 6,000 years ago) and depicts dinosaurs on Noah’s Ark. I’m sure it provides some appropriately glib answers for what happened to them since the Flood.

I’m also reasonably confident that it does not address some other “literal truths” from the Bible that do not square up with the archaeological record, such as:

1. The claim that rabbits “chew the cud.” (Leviticus 11:6 and Deuteronomy 14:7)
2. Jesus’ call for self-mutilation as a method of prevention of sin (Matthew 18:8-9; Mark 9:45-46)
3. The absence of any record in the extensive written history of the Egyptians of the Exodus of the Hebrews or any of the plagues that preceded it. (See most of the book of Exodus)
4. The repeated calls for the imminent, within-our-lifetimes return of Christ the Redeemer (e.g., 1 John 18, the entire Book of Revelation) that haven’t happened for two thousand years yet.

There will be rationalists and scientists protesting the opening of the museum. Of course, the kind of people who show up are already convinced that science, reason, and evidence are simply irrelevant when compared to the inerrant, inspired word of God found in the Christian Bible. It’s important to note that Edwin Kagin, the organizer of the rally, said in a press release that the protesters do not challenge the right of the museum’s sponsors to present their views. “They can teach that things fall up if they wish,” said Mr. Kagin. “We’re simply trying to show that their views are based on a particular and narrow religious doctrine, not on good scientific evidence.”

If I still lived in the area, I would seriously consider a trip to Cincinnati to join the festivities. It’s too long a trip to make there and back, though, so I’ll just wish my friends from Knoxville who will be going there my best wishes.