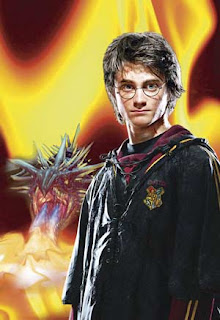 A woman sued her children’s school in Gwinnett County, Georgia because the school’s library carried Harry Potter books. She chose to represent herself and challenged the books on the theory that they advocated witchcraft, which is a religion, and therefore violated the Constitutional separation of church and state.

After making this argument, she turned around and said “I have a dream that God will be welcomed back in our schools again … I think we need him.” So I guess what she wants is not so much separation of church and state so much as separation of the state from religions that she doesn’t like.

Despite this rather confused thinking, she “told reporters it may be time to rethink her arguments with the help of an attorney. ‘I maybe need a whole new case from the ground up.'” Well, at least she puzzled that much out. But she hasn’t given up the fight and literally wants to make a Federal case out of the whole thing.

Witchcraft and magic, by the way, are not religions. They may be attributes of a religion, but are not religions themselves any more than Baptism is a religion. Wicca is a religion, but it’s not the same thing as what the Harry Potter books depict by a long shot. And this woman would probably be very uncomfortable considering that many religions (Christianity included) incorporate magic into their world views in the form of the belief that an appeal to a supernatural entity for a favor (a “prayer“) can induce that entity (“God”) to alter physical reality (for instance, healing the gravely sick).

An aside about magic in Harry Potter: yes, there is plenty of magic around, which is sort of the point of the stories. And yes, themes of good and evil permeate, the “source” of all the magic that the various characters wield is never disclosed or even discussed in any meaningful way. Magic is depicted in the books as having no inherent moral quality; rather, it is simply another tool that someone might use for a good or evil purpose depending on the intent of the user. It is almost “secular,” because the magic does not seem to be a power delegated from any god, devil, demon, or other similar kind of source, and none of the characters seem to believe in any kind of an afterlife or any kind of a diety.

But more than that, it’s fiction. It’s not portrayed as real; it’s as harmless as any kind of very popular entertainment can be. Any kid who tries to grab a broom and fly like Harry Potter will learn the difference between reality and fantasy very quickly — and note that Harry never jumps off a building to start flying on his broom; he always takes off from the ground, so a kid who jumps off a rooftop with a broom didn’t get that idea from reading the books and would probably have jumped off anyway (maybe wearing a red cape).