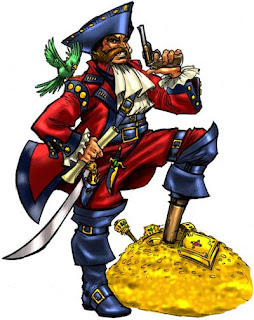 It still astonishes me to think that international trade faces a live and real threat from pirates. For instance, pirates operating off the coast of Somalia seized a Danish ship today, possibly killing one or more of the sailors on board. A French warship loitered just outside of Somali territorial waters and did nothing to prevent the attack.

The joke is too easy to make: “Arr! Avast and yield up ye cargo, mateys! An’ don’t be expectin’ no help from yonder cheese-eating surrender monkeys thar!“

In the movies, pirates are often portrayed as lovable scoundrels, handsome and brave. But in real life, pirates are no joke and hardly worthy of admiration. They are robbers, criminals, and possibly even lending support to terrorists who provide manpower, support, and weapons for these guys to ply their criminal trade, just as they do drug dealers.

It is in the interests of every civilized nation to stamp out piracy — this is true now just as it was true in the 1700’s when the British got serious about this issue and took it upon themselves to take the lead in eradicating this menace. No one gets mad at the British for being the world’s policeman against piracy and slavery back in the age of sail; indeed, whatever other flaws may have been present in the British empire, the efforts of the Brits to eliminate piracy and slavery stand out as some of the greatest moral achievements of western civilization. It’s a shame that this particular weed keeps coming back again and again.