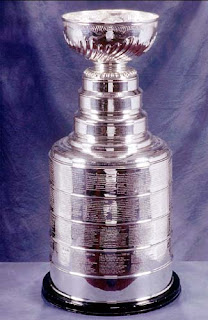 A 6-2 game, one in which Ottawa was playing catch-up the whole time, just wore the Senators out. Anaheim’s depth was simply too much for them. The Ducks could have Selanne, Neidermayer, McDonald, or Pronger, or any combination thereof, on the ice at will. That’s just plain too much for anyone, especially not a Ray Emery playing way off his game.

Normally on Wednesday nights, I go out to dinner with some of the lawyers and our newspaperman and Buddhist friends. Some nights after that we go to the zendo and meditate. But tonight is different. Lights-out games in the Stanley Cup playoffs don’t happen all that often — and especially not games where my team wins it all.

The Senators have no one to blame but themselves. The official box score shows the winning goal as an unassisted shot by Travis Moen, but in fact it was an own goal, caused by confusion between an Ottawa player with the puck and the goalie; no Anaheim player touched the puck on that play. With about eight minutes left to play, down 5-2 you could read their faces — Ottawa had lost its will. They’d been beaten, and they knew it. Beaten by their own penalties. Missing a penalty shot by losing control of their own puck.

In about six weeks, twenty-five Ducks will have their names permanently engraved on the fifth band of the Cup. Between now and then, each player on the team will get to have the Cup to themselves for a day — to take to the beach, use to dispense punch at a party, do whatever they want with it. How cool is that?

And, of course, the NHL pre-season begins in July.