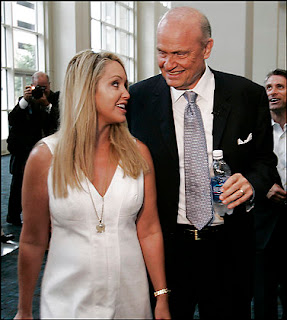 It all started with a throwaway joke by Joe Scarborough on his punditry show on MSNBC about Jeri Kehn, “Right Said” Fred Thompson’s smokin’ hot wife.

Suddenly, it seems the whole blogosphere is aware of the fact that not only is Thompson married to a woman fourteen years younger than himself, but that the Tennessee Stud himself seems to enjoy looking at her body because he finds her attractive. Apparently this is a bad thing, and so is commenting on it.

Commenting about how you’re not supposed to comment on that, though, is fair game: Helen Reynolds warns men to protect their “right to leer” and Ann Althouse invites self-aware men to (politely) leer away, at least at their own smokin’ hot wives.

Now, there would be plenty of other things to commend the lovely Ms. Kehn for. And we can acquit her of Wonkette’s accusation that she is merely a trophy wife. She’s an attorney and a media consultant who has worked for the Republican National Committee and the Senate Republican Conference. She’s clearly no dummy. She and “Right Said” Fred have had two children together and they met at a church in Illinois, which all seems very proper and “family values” Republican to me (yes, I know that Senator Thompson divorced his first wife).

But no one – not the feminists upset with Thompson leering at her and not the conservatives stampeding to defend him – seems to care that this woman has a career and an identity of her own separate from her husband. They’re all worried about her ample breasts and whether “Right Said” Fred should be enjoying looking at them publicly (or privately, or at all).

Well, damn. Now I’m in trouble, too and I guess I’ll just have to add this to the long list of reasons why I’ll never be President. I think my wife is smokin’ hot, I check her out when we’re doing stuff around the house, and I tell her that I think he’s attractive often. I guess maybe I’m supposed to think she’s attractive but keep that opinion to myself? (Seems to me that she’d like hearing that her husband finds her attractive.) Or I’m not supposed to consider her attractiveness, ever, and instead I should love her for her other merits as a person? (Which I do, but why should that exclude me from finding her attractive, too?) Or I’m not supposed to think she’s attractive at all? Come on, a husband is supposed to be attracted to his wife! Why should “Right Said” Fred be any different than me?

In truth, it seems that there are actually very few left-wing sites that I can find that are commenting about this. There are, however, a ton of right-wing sites that are dogpiling on the idea that the left is critical of Thompson having a sexy, younger wife. By the way, in the picture, I don’t think Fred Thompson is really leering at his wife. It looks to me like they’re sharing a joke at some social function.

This is what it looks like when a man leers at Fred Thompson’s wife. Back off, Wolfowitz, you’re in enough trouble already.