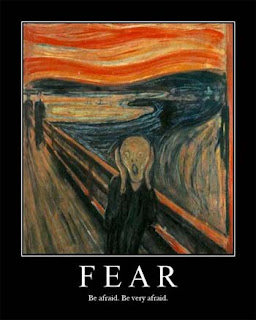 I read in Freakonomics that more children are killed every year drowning in swimming pools than are shot with guns. But no one fears swimming pools and lots of parents freak out when they find out that there is a gun in a house that their children are going to play in.

Now, we learn that sand holes at the beach are more lethal than sharks. No one is trying to ban shovels, but people are irrationally afraid of sharks. That’s not to say that sharks are fun to run into when you’re casually swimming, but it is to say that the risk of a shark attack is, in most cases, negligible.

Something like 3,500 Americans have died in Iraq since combat operations began in 2003. More than that number of Americans die each month in auto accidents. Based on the way people drove on the highways today as I went to and from Stinking Bakersfield (yes, I’m going there a lot these days) I can understand why. That’s not to say that those 3,500 Americans should have died in Iraq and it does not mean that there aren’t other problems that are resulting because of the war. The war is serious business. But it’s not nearly as bloody a business as driving to work.

We should have more nuclear power plants. But people fear meltdowns and radiation leaks. Never mind that oil refineries and coal mines do much more ecological damage than nuclear waste.

Your cell phone is not going to light you on fire at a gas station.

What we fear, and what we should fear, are often very different things. But fear is so powerful, and so easily-manipulated, that we often simply fear what we are told to fear rather than what is really dangerous.