This morning, I got to thinking about the kind of week I’m going to have. I figured, what with the Fourth of July falling on a highly inconvenient Wednesday, it’s pretty much just a day off in the middle of the week. 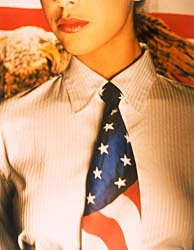 But I also figured I’d have a little fun and wear my American flag necktie.

Only I couldn’t find it. I have this great tie rack that The Wife bought for me to hang all of my ties, and I could have sworn that I put it in there, because I like to wear that tie on days when there is a significant civic or patriotic event — like Election Day, Flag Day, or in this case, Independence Day. I was quite displeased to not be able to find the tie despite a lot of looking around, not in the least because the tie was a gift and it would have felt like kind of an insult to the people who gave it to me to lose the tie.

But, after some searching, I had to admit that it just wasn’t there, and most likely had been lost in last year’s move from Knoxville to Palmdale. So it would need to be replaced. I arranged with The Wife for us to go grab a bite to eat at the mall because I figured a flag tie would be available in one of the department stores.

Turns out, no! Sears, JC Penny, Gottschalks, and Mervyn’s all had no American-flag patterned neckties. Gottschalks had a red, white, and blue patterned Jerry Garcia tie. There were no kiosks in the mall selling ties at all. Reluctantly, we tried Wal-Mart and Target, too. Everywhere we went, we struck out on American flag ties. Granted, Gottschalks is about as high-end as retail stores get up here in the Antelope Valley, but as you’ll read in a moment, I rather doubt I would have had any success at Bloomingdale’s or Macy’s, either.

Round about the time we were leaving Target, I got to thinking — perhaps this is not just an annoyance. If there were ever a time retailers would want to sell ties with the American flag on them, it would be two days before Independence Day, to mooks like me who want to wear a special tie for the holiday. Demand for such a thing is at its peak, right now. But such a tie is nowhere to be found in any of these national retail outlets. That means that the buyers for these stores must think that these ties just aren’t going to sell. Why is that?

The conclusion I came to, with some sadness, is that the American flag is not a popular emblem right now, even among Americans. We aren’t so proud to be Americans these days as we have been in the past. Our patriotism is not at a high ebb, because… Because of a lot of things. You can view that “why” question through your own political lens; but for whatever reason, we aren’t putting an image of the flag up in our store windows anymore like we did after 9/11. We aren’t buying and posting so many patriotic bumper stickers. We are all talking about ending the war in Iraq in terms of “when” and “how” rather than “if” and our dreams of a Middle Eastern Marshall Plan have vanished like the smoke from yesterday’s cigarettes — nothing left of that noble idea but a faintly acrid and unpleasant smell and a nearly indetectable stain on the ceiling. We’re not a proud nation and we aren’t wearing our patriotism on our sleeves very much.

Well, not me. It’s an imperfect country, and we’re an imperfect people. We’ve made some geoopolitical mistakes and we don’t know how to make good on them, it’s all true. But it’s also true that we’re still a strong, generous, morally upright nation. It’s also true that we still do much, much more good than harm in the world. It’s also true that we are still a constitutional democratic republic; we are the greatest political, legal, and economic success of the modern world; we are the most inclusive and diverse nation on the planet and that inclusiveness is one of our great strengths; if we are an imperial power, we are surely the most benevolent empire the world has yet seen. Our Constitution remains a work of staggering genius despite whatever imperfections one might identify in it, and it is copied by developing nations across the world to the exclusion of all other competitors. We are a nation ruled by laws, and our laws are created by our people with the intent, and generally the effect, of doing good. I’m proud to be American, to participate in a country like this one. Sure, it’s not perfect. But it’s still pretty damn good.

And since The Wife found my tie after we got home, right where it should have been all along, I’m going to wear my American flag tie proudly tomorrow, too.