The legend goes that Julius Caesar came across a statue of Alexander the Great in his travels on assignment to be the junior governor of what is today Portugal. One of his companions noticed that Caesar was the same age as Alexander when he died. Caesar burst into tears — at that age, Alexander had conquered everything from the Adriatic Sea to the Indus River, and Caesar had managed to get himself elected to the equivalent of a municipal court judge and was on his way to be some other guy’s lieutenant. 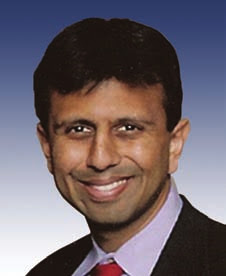 So with that story in mind, I congratulate Bobby Jindal on being elected Governor of Louisiana. Mr. Jindal, the son of immigrants from India, has just been elected the youngest state governor in America’s history at age 36 — one year younger than me. I don’t aspire to the equivalent office here in California, but it does make me wonder what he had do in order to get this. Get elected to Congress, for one. Here I am all happy that I just bought a house.