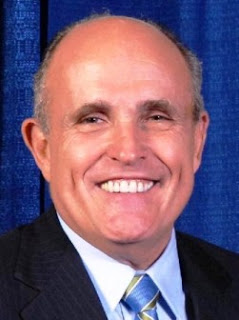 Rudolph W. Giuliani will be 64 years old on the next Inauguration Day.

He has working-class roots and was raised in a Roman Catholic household. He graduated from Manhattan College with a degree in political science and a minor in philosophy (focusing on theology), and considered joining the priesthood. Instead, he went to NYU School of Law, graduating cum laude in 1968. He has not served in the military; his draft eligibility was deferred for one year while he clerked for a Federal District Judge, but was registered as 1-A eligible thereafter and was never drafted due to a high number. In 1970, he joined the U.S. Attorney’s office and worked narcotics before serving as a low-level political appointee in the Ford Administration’s Justice Department, where he worked political corruption. In 1981, he became the Associate Attorney General, the #3 official in the Justice Department, and two years later, he became the U.S. Attorney for the Southern District of New York, where he led prosecutions against white-collar criminals and organized crime. His first marriage ended in an annulment, and his second marriage (to a New York City newsreader) ended in a high-profile divorce. He is on his third marriage and has two adult children (from his second marriage) from whom he has reportedly become estranged.

Giuliani’s first political race was a three-way contest for Mayor of New York City in 1989 between himself, David Dinkins and Ed Koch; Dinkins won. Giuliani ran again in 1993, and narrowly defeated Dinkins. In 1997, with extraordinarily high approval ratings he was re-elected in a landslide, claiming responsibility for a dramatic drop in crime in the city. He formed an exploratory committee to run for Senate in 2000, but dropped out of the race due to the onset of prostate cancer. He gained national prominence for the manner in which he handled the terrorist attacks on New York City in September of 2001 and beginning the subsequent rebuilding efforts, which earned him recognition as Time Magazine’s “Person of the Year” for 2001. He briefly served on the Iraq Study Group but dropped out to run for President of the United States.

Abortion: Basically pro-choice but has since made concessions towards a more pro-life position, promising to select “strict constructionist” judges and supporting parental notification laws and the ban on partial-birth abortions. Rating: .5 of 1 points.

Amending the Constitution: Has privately indicated to social conservative leaders that under some circumstances, he would support an amendment to prevent states from recognizing same-sex marriage licenses issued by other states. (He supports domestic partnerships.) No other advocacy for amendments. Rating: 3 of 6 points.

Anti-Terrorism Policy: Foresees lengthy geopolitical struggle with building of wealth and republican governments in Iraq and Afghanistan as overt focus of direct anti-terrorism efforts, with substantial amounts of covert operations and paramilitary support for friendly factions in failed states, all aimed at pro-actively engaging terrorists and sponsors of terrorism to deter attacks. Demands close engagement with strategic partners, realistic understanding of religious and political forces underlying terrorist motives, buildup of force projection ability of regular military, and preparation for future attacks on U.S. soil and against U.S. interests. Rating: 7 of 7 points.

Balanced Budget: Overall, platform calls for substantial increase in military spending. Advocate of supply-side economics and tax cuts as economic stimulus. No particular emphasis on controlling deficit spending in platform. Turned in balanced budgets during tenure as Mayor of New York City and claims to have trimmed waste out of New York City’s budget. Successfully led Constitutional challenge against exercise of line-item veto by President Bill Clinton, although this action is defensible for other reasons. Rating: 4 of 8 points.

Civil Liberties: As Mayor of New York, attacked controversial art displays and otherwise been a “culture warrior” willing to threaten censorship, although has never succeeded in doing so. Consistently sided with law enforcement on claims of civil rights abuses including alleged police abuse. Favored renewal of the PATRIOT Act and supported warrantless wiretaps. Recently endorsed idea of Constitutionally-protected right to bear arms, in contrast to prior efforts to use civil litigation against handgun manufacturers. Debatably abused Constitutional rights of homeless in efforts to clean up city. Favors abolition of prohibition on service of gays in the military, favors domestic partnerships for gays but not marriage. Appears to understand federalism. Rating: 3 of 9 points.

Environment: Sprayed for mosquitoes during West Nile Virus outbreak in 1999. Prior to running for President, his law firm and security consulting group did work for energy companies but he seems to have not done much, if any, of that work himself. Supports expanding nuclear power facilities. Open to proposals to combat global warming. However, environmental protection appears to be a low policy priority for Giuliani. Rating: 2 out of 4 points.

Free Trade: Would reinvigorate Doha round of GATT negotiations and keep American companies competitive with targeted tax breaks and reform of Sarbanes-Oxley Act. (Huh?) Hints of possible trade sanctions against China and some past criticism of NAFTA, but also approves of CAFTA and South Korean free trade treaties. Rating: 3.5 of 5 points.

Generalized Foreign Policy: Wants to improve persuasive power of diplomatic efforts to better explain political appeal of U.S.-style democracy, and would charge ambassadors to advocate in favor of U.S. policies both to foreign governments and to the people of foreign nations directly. Helped his law firm form international practice groups and has personally traveled to Europe for political fundraising and appearances with foreign politicians. Referred to New York City in 2004 as “The Capital Of The World” but has limited expectations of abilities of the United Nations. Proposes toothless but diplomatically significant condemnation of human rights abuses and trends away from democracy in Russia and China. Rating: 5 of 6 points.

Immigration Policy: As Mayor, instructed city officials to not report presence of undocumented aliens seeking police, fire, medical, or educational services from City providers and liberalized dispensation of retroactive permission to enter and work for law-abiding illegals. Would require all immigrants and visitors to have a U.S. government-issued I.D. card. and favored one version of “guest worker” program. More recently has taken tougher stance on issue; stated that illegal immigrants who commit crimes are to be deported. Would build a “technological wall” to supplement ocean-to-ocean fence along Mexican border and enact statistical tracking for border activities. Rating: 5 of 5 points.

Iraq: Favored the initial invasion, and continues to see the invasion as having been justified all along. Favored “troop surge.” Opposes short-term withdrawal of major U.S. military presence. Wants to see substantial economic development in Iraq before major withdrawal of forces. Sees strong U.S. presence in Iraq as deterrent to overt Iranian activity in region. Rating: 5 of 6 points.

Korea: Favors Bush Administration’s policy of six-way multi-national diplomacy with North Korea and careful economic sanctions applied in coordination with China. Seven months ago appears to have not known whether Iran or North Korea had more advanced nuclear program; apparently ignorant statement might be defensible on deeper analysis. Rating: 4 of 5 points.

Middle East Peace Process: Opposes creation of Palestinian state under current circumstances: “Palestinian statehood will have to be earned through sustained good governance, a clear commitment to fighting terrorism, and a willingness to live in peace with Israel.” Suggests that peace can only be achieved through a militarily powerful Israel, uncritical of Israeli policies. Rating: 3 out of 4 points.

Science and Technology: Enthusiastic adopter of high-tech methods of statistical analysis for governmental performance and streamlining governmental efficiency. Foresees educational challenges in fields of math, hard sciences, and engineering. Does not understand hostility to teaching evolution in public schools but has not explicitly condemned teaching of intelligent design as parallel to evolution. Supported expanding stem cell research and Federal funding of same. Rating: 4 out of 4 points.

Separation of Church and State: Unsuccessful attempts to censor anti-Catholic artwork during term as mayor. Once condemned a New York City schoolteacher who had been terminated for leading her class in prayer, but now claims that separation of church and state has gone “too far” and would support prayers at school ceremonies like graduations, and in 2000 Senate race, suggested that public school teachers should be able to teach the Decalogue. Rating: 1 out of 5 points.

Torture of U.S. Prisoners: Believes waterboarding would be justified to gather information about an imminent terrorist attack; does not believe sleep deprivation is a form of torture. He would authorize military and intelligence-gathering interrogators to “…use every method they could think of. It shouldn’t be torture, but every method they can think of.” Rating: 1 of 4 points.

Overall Impression: Giuliani’s three big selling points are a realistic yet optimistic vision of what the government can achieve, a military and foreign policy that despite its aggressiveness is not blind to the need to maintain good relations with our international friends and neighbors, and most of all, the prospect of competence in government, which would be a refreshing change from the previous six and a half years. He hasn’t fleshed out all of his platform yet, but it is still more than a year away from the general election, so maybe that’s not so important at this point in time. However, his track record indicates a strong streak of authoritarianism and a callous disregard for individual rights and liberties when they become inconvenient to achieving his political objectives. Also of significant concern is election-year shifts to his political perspective — many of his socially moderate-to-liberal positions taken while Mayor of New York City have been “hardened” to pander to social conservatives, leaving a substantial question about the policies he would pursue if elected.

Who should I do next?