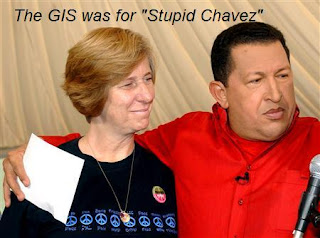 Hugo Chavez, the unabashedly America-baiting leftist wannabe-dictator of Venezuela, is trying to push through a referendum that would restructure Venezuela’s constitution, permit him to run for re-election indefinitely, and allow him to sidestep the legislature and courts of that country pretty much whenever they got in the way of him imposing his unilateral will on the people. The outcome of the vote is very much in question.

So, Chavez has threatened to expel foreign journalists who report on results unfavorable to him, silence domestic media that does the same thing, and to cut off oil sales to the United States if anyone even accuses the “Si” campaign of engaging in any kind of voter fraud. What a champion of freedom and liberty this guy is. South America should be proud.

I’m particularly intrigued by the idea that he would cut off oil supplies to the U.S. For all of the heat of the rhetoric exchanged between Chavez and the U.S., the two countries are very close trading partners indeed. Sales of oil to the U.S. are far and away Venezuela’s biggest source of income, either foreign or domestic. And 15% of all petroleum products consumed in the U.S. are derived from oil pumped in Venezuela.

So what would happen if Chavez really did cut off oil shipments to the U.S.? Two things. 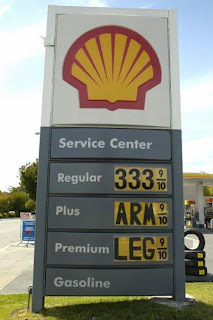 First, oil prices here would immediately rise, probably by about a dollar a gallon for gas. People would be really pissed off for about two weeks. Then, the inelasticity of the demand curve for gasoline would kick in, and people would pony up the money and buy the gasoline anyway. When the crisis eventually passed, gas prices would slowly fall back, more or less, to their current levels (which are already higher than consumers are accustomed to paying for more than a few weeks at a time, but we’ve got to learn to deal with that no matter what Chavez does).

In the meantime, we’d buy more oil from Mexico and eventually swallow our environmental pride and open up our Alaskan petroleum reserves, and otherwise get the oil we want from elsewhere, because as a nation, we can afford to pay top dollar. So we’d survive just fine, although it would be a drag on the economy and a short- to mid-term economic hardship, particularly for lower-income Americans.

And who knows? We might just develop economically efficient shale oil extraction technology. Then we’d tell Chavez to take his low-grade petroleum and… ah, use it for lubrication.

But then, Venezuela’s economy would start to dry up like a big dog. Of course, there would still be all this petroleum-extraction infrastructure and tens of thousands of people whose jobs are related to it, so what would they do? Without U.S. money flowing to Venezuela in exchange for the petroleum, Chavez would have three choices about what to do with his national oil industry. First, he could try to find new customers, who would simply re-sell the oil, at a profit, to the U.S., thereby completely defeating his threatened embargo after moderately inconveniencing us with a modest price increase.

Second, he could build up his reserves of crude and thus bank against the day that he could proclaim victory and sell again — if he had the storage capacity to do so, which is quite unlikely. He certainly lacks the ability to refine the crude; there are almost no refineries anywhere in the world capable of refining Venezuela’s high-sulfur crude oil into a useful fuel product — outside the United States. (This inconvenient fact would probably make option #1, finding other customers for his oil, a rather difficult proposition for Chavez; sure, a country like Brazil or South Africa might buy it, but what are they going to do with it once they get it?) 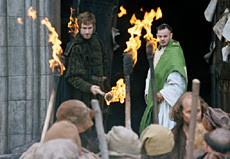 Or third, he could lay off his petroleum industry for the duration of the crisis to save money on paying their wages, thereby shifting the expense of supporting these people to his public welfare system. In the meantime, the lack of funds coming into the government would reduce his government’s ability to provide for social welfare services (like, say, medical care or electricity) and his economy would spiral into a substantial recession and eventually his people would either rise up in revolt against him and throw his fascist ass out of office, or he would be forced to fold his hand like Gorbachev after eating a 1980’s-sized bowl of SDI.

Who do you think could last the longest in this game of economic chicken? If you picked “Hugo Chavez,” you made the wrong call. Chavez has forgotten the Golden Rule.