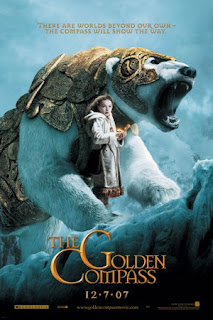 The Wife and I went to a sneak preview screening of The Golden Compass tonight.

I left the movie feeling unsatisfied, although I can’t precisely explain why. Part of it surely was all of the religious controversy surrounding the movie, with the Catholic League and some other Christian groups condemning the film (without having seen it) as promoting atheism. I suppose I was sort of hoping for a crypto-atheist manifesto to be evident from the film, and that is the source of my unease. I’ve no reason to have been disappointed.

There was nothing pro-atheist in the movie at all.

There was plenty of disestablishmentarianism and anti-authoritarianism, but nothing at all about religion. You’d have to read between the lines, and pretty closely, to see an anti-religious agenda here. If you don’t approach the movie specifically looking for an attack on religion, you won’t find one here. (Of course, if that chip is already on your shoulder, that’s a different matter entirely.)

The heavies in the film, called the “Magisterium,” who claim to be the representatives of the “Authority,” are just that — Authority, pure and simple; Authority as archetype. The officers of the Magisterium wear distinctive vestments, which I suppose might be considered vaguely clerical in nature, but it was all about authority and power. But their minions wear what look like military uniforms, not vestments.

If you wanted to look for religion in this movie, I suppose you could find it, but if that’s how the movie is working, it’s at a very deep and subtle level. And it’s not as if the filmmakers weren’t capable of using the medium for allegory, either; they did so on occasion in a fairly heavy-handed way. The script is not a model of elegance or subtlety, although it does get the job done.

Visually, it’s a tour de force of what CGI animation can do with skillful artists involved at all phases of production. I’ve never seen better CGI, particularly with all of the animals. One of the premises of the movie is that it is set in an alternative world where a person’s soul is manifestly real — because it takes the form of an animal companion called a “daemon.” Daniel Craig’s daemon is a leopard; Nicole Kidman’s is a monkey. The young heroine has a daemon, too — but before puberty, the shape of that daemon can change at a moment’s notice. This was one of the more interesting allegories there — children are malleable, changeable, and their true personalities and forms have not yet been set; thus, in this world, their daemons can change, too.

Because pretty much everybody has an animal daemon, who is the external reality of their soul, the daemon projects what’s going on inside the person’s mind, or more particularly their emotional state. So, the filmmakers accomplish this by digitally manipulating the animal working with the actor, so that the animal’s face and activities represent the emotion the character is feeling. When the person is threatened, the daemon becomes aggressive; when the person is scared, the daemon tries to hide.

Dialogue between the person and the daemon also provides for a convenience of exposition. This is done somewhat clunkily once or twice, but it’s useful early on in the film to explain how this alternative world works. I suppose if I had read the books that the film was based on, I wouldn’t have needed the exposition at all, but having not read them, I often felt like there was more going on in that world than I really understood. In a way that was good, but it also kept me off my balance for much of the movie.

And it is a beautiful world indeed. The architecture of the buildings combines Gothic, Rococo, and Art Deco elements seamlessly. Nicole Kidman is stunning — she looks like she walked straight out of Sam Spade’s office in 1947. She also shows her chops as an actor (except, I thought, for the last scene in which she had significant dialogue) and is silky-smooth when she tries to seduce another character. Daniel Craig is underused, both for his rugged good looks and his newfound star quality (he is James Bond, after all). 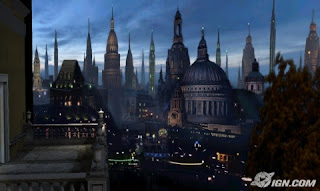 The gorgeous mattes incorporate elements of the London of our world (like St. Pauls’ Cathedral and the now-famous Swiss Re “Gherkin” Tower) with the fantastic Art Deco world of this alternative, magical reality in which people travel in airships and paddlewheel-powered ocean liners, and rifles and longbows happily coexist in the hands of soldiers who rightly fear the warrior “Ice Bears.” Real places like Svalbard, Norway and recognizable maps of Europe add an eerie verisimlitude to the obviously fantastical world that blends magic and technology with casual ease.

Pleasant surprises in the casting include Derek Jacobi and Christopher Lee. I knew Sam Elliot was in the movie, and his presence alone makes a Norwegian hunting outpost on a remote, glacial island north of Norway feel like an old West movie set in the foothills of the Wyoming Rockies. Kathy Bates and Ian McKellan do easily recognizable voice-over work. The score is orchestral and epic in its scope. Much of the movie takes place in snow-bound settings, which dovetailed into the cold weather we’ve been experiencing in real life.

The ice bear fight was awesome, the most exciting part of the movie for me. Yes, it’s all computer graphics, but so what? They looked like bears fighting, not like people in bear suits fighting. And it was an intense fight.

The movie is not for people who are lovers of unambiguous portrayals of moral issues. The hero of the film is, to say the least, veracity-deficient. This turns out to be an asset in a difficult situation, which leaves you questioning the value of truth. You are also asked to decide whether things like truthfulness, even if good, are more important than other good sorts of attributes like loyalty and courage.

So too will you question the value of conformity to order and law, particularly when you are asked to do something obviously painful “for your own good.” There is little doubt that the government of this world is evil, but the true reach of its evil power is far from clear.

Finally, you are also asked to question the motives of someone you think is a bad guy, and that issue remains unresolved at the end of the movie — and that, in turn, makes me, at least, question the motives of someone who is apparently supposed to be a good guy, too. But that kind of ambiguity is of great interest to me and I liked that. Their motivations are not yet fully clear or their moral status resolved by the end of the movie, but there are two more movies to make in this series.

Then, too, there is a discussion of what a Christian might call “original sin,” and there is a cryptic substance called “Dust” which is the subject of a great social conspiracy of silence and discussion of which is assigned great moral weight. Both of these, I suspect, will ultimately be found to relate to sex, and attaining a sexual identity seems to conform with having one’s daemon “settle” or achieve a permanent form. But, at least in this world, these matters also seem to have been substantially politicized, such that discussion of the subject is a threat to the government as well. Presumably in later films, we will learn more about this subject; for now, it is all quite mysterious.

Overall, I did enjoy the movie; it took me to another world for nearly two hours and provided good entertainment for the price of two regular tickets. Fan enthusiasm was evident; people cheered for the title credits and applauded at the Fellowship Of The Ring-like end of the movie. Hopefully, it won’t be too long before the next film, which will probably be called The Subtle Knife, is issued. For the rest of you, the movie’s general release date is December 7, next Friday. Go see it, and don’t go looking for religion or atheism; disabuse yourself of the idea that this movie has any such agenda one way or the other (even if you think the book it is based on did have such an agenda). Just go see the movie as an escapist fantasy, and I bet you’ll enjoy it just fine.