The small city of Chambersburg, Pennsylvania has become the latest battleground in the apparently silly but ultimately consequential discussion about religion in public life in America. The whole thing started with a series of advertisements, which I first saw back when I lived in Knoxville, that look something like this:

Now, I have to admit, that when I first saw the billboard, my immediate response was a sarcastic “…unless he’s gay.” But I corrected myself; that was ungenerous. There are plenty of Christians who really do practice the idea of “hate the sin, love the sinner,” and can at once embrace and love someone while still firmly maintaining that something they do is wrong. That must be difficult to do, and it’s something to admire in those people. My sarcasm came from the fact that so many self-identified Christians seem unable to do this and instead are very clear that they hate the sinner, too.

So, such a billboard went up in Chambersburg. Like pretty much everywhere else in the country, there were atheists in the community who saw the sign and thought that they were being preached to and didn’t care for that very much. So one guy bought a few weeks of billboard time, and he ran this ad by way of a donation to the Freedom From Religion Foundation: 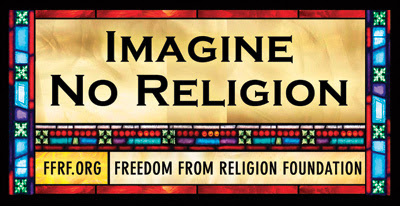 This caused a bit of a stir out there in rural Pennsylvania. A very small bit, from what I can tell, from the sorts of people who would have been offended by any reminder that there were nonbelievers within their midst. Although “only a few calls” complaining about this ad were placed, the billboard company nevertheless took down that sign as soon as their contractual obligation was completed, and replaced it with this one: 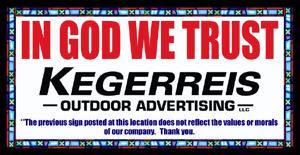 The bottom line of the text is a bit difficult to read, but it is: “The previous sign posted at this location does not reflect the values or morals of our company. Thank you.” So the company lost no time trying to separate itself from its customer, despite what seems to have been only a very few complaints.

But this was not enough. After hearing about the local controversy, a religious advocacy group got involved, and it bought another billboard in Chambersburg, just down the street from the original board that had shown the three signs illustrated above. This one, escalating the dispute dramatically, looks like this: 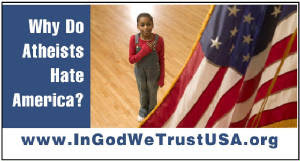 2. Local atheist has chip knocked off his shoulder, buys billboard suggesting that religion might not be so great after all.

3. Local Christians have chips knocked off their shoulders, complain. Billboard company executives recoil in terror from controversy and use company assets to proclaim that they aren’t like atheists.

4. National advocacy group escalates local dispute by saying something seriously offensive about atheists (and promptly dress themselves up in the clothes of righteous moral indignation, as you might expect).

Now, I’m tempted to say that the line really got crossed at step #4, and not before. But then again, I would. I can’t pretend to be entirely objective about this. What I can do is to suggest that what’s going on is a trading of outrages is going on, being exploited by political advocacy groups. Let’s at least understand that. And once we do understand that this is a manufactured controversy in which both sides find mutual benefit in antagonizing one another, we can take a step back, deny the wannabe politicians on both sides of the spat their money, and ask ourselves a few searching questions.

Religionists: Is it really appropriate to make a mass-media display of religiosity like this? In particular for the Christians, didn’t Jesus exhort his followers to pray in secret rather than in public? And from a practical point of view, you must realize that a preachy outreach program like this will both gain some converts and turn some people off to the point that they will reject the religion. Do you really have a net gain of converts to the religion as opposed to away from it by doing this? What do you hope to accomplish, other than demonizing atheists?

Atheists: What on earth is so bad about telling people to be nice to their neighbors? If it’s done in God’s name by people who believe in God (as is their right), why is that so awful? And aren’t the religious advocates within their rights to buy advertising if they think it’s to their advantage to do so? Are we going to win “converts” to atheism with a mass-media campaign anyway — aren’t atheists better off explaining themselves and their world view on an individual basis and letting people make up their own minds? What do we hope to accomplish with a PR campaign anyway?

So too does a lack of belief in God not automatically equate to a lack of patriotism. The greatest martyr to freedom in America’s history, Abraham Lincoln, overtly eschewed religion in general and specifically Christianity, as attested to by many of his closest friends after his death. Lots of atheists have served in the military and made the ultimate sacrifice for freedom. Their deaths were as motivated by love of country as those of their Christian and Jewish comrades; their memories are as worthy of our honor and respect today. Yes, there are too atheists in foxholes; so I am assured by an atheist who really was in a foxhole in Vietnam during an artillery barrage. Pat Tillman was an atheist and he walked away from a million-dollar-a-year NFL contract to join the Army; he got killed in Afghanistan by friendly fire. What that any less noble than a believer’s decision to serve? How does his lack of faith diminish the impact of his story or the value of his service?

I think that the idea of a discussion about the proper role of religion in our collective public life is both healthy and overdue. But name-calling and tribalism aren’t good tools to advance that debate, and the whole billboard thing, from start to finish, has left the discussion poorer. So while I suggested before that the final sign crossed a line from merely challenging to openly insulting, perhaps the real problem was the first one, for officiously preaching to an audience that maybe didn’t care to hear the message in the first place. At minimum, I take this as an object lesson that humanists need to adopt a different approach to their public relations efforts than do religionists, because this sort of tit-for-tat makes everyone involved looks juvenile.