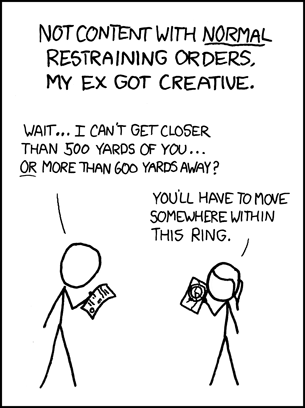 A client came to a routine status conference last week. Actually, he came late and missed the whole thing. But that didn’t stop him from running into the other party — his brother — in the parking lot. Pushing and shoving and strong language and threats of violence apparently ensued; my client came into my office and showed me the remains of his cell phone. He wanted a restraining order, so I had my assistant prepare the civil harassment paperwork and give notice.

Yesterday was the day we’d given notice, and everyone showed up — my client and his brother; my client brought basically his entire adult family in tow. Evil Brother brought Other Evil Brother. The first thing they all got to see was the counter clerk telling me that because the parties were brothers, I couldn’t file the restraining order application as civil harassment; it had to be a domestic violence filing. I protested; they’re all over 40 years old and live in separate households. No, the clerk said, if they’re related, it’s a DV case. Here’s the paperwork.

Since I was tasked with getting two restraining orders, one against Evil Brother and the other against Other Evil Brother, that meant I had to fill out two applications, then and there, and get them turned in. This took nearly an hour. Then we got to wait for another two hours in the DV court listening to other TRO applications. Some of them were as strange as the XKCD cartoon I hotlinked to start this post.

Most remarkable was an application in which the petitioner claimed that the respondent had told her boss at Wal-Mart that she (the petitioner) had filed a false child welfare report with a county agency. The judge granted that application without hearing any oral testimony at all from the respondent, who threw a hissy fit, stormed in and out of the courtroom, and had to be restrained by bailiffs. After calling for backup, the bailiff announced loudly, “Your Honor, for the record, the respondent said in the hallway that I would die.” Unclear if “I” meant the bailiff (because the respondent had threatened him) or the respondent (because not harassing her enemy at her job will literally kill her?). The judge indicated that he had decided the case based on the pleadings; apparently the respondent basically admitted the accusations and wanted to explain why the petitioner was a bad person somehow. The respondent spent the next five minutes loudly tearing up sheets of paper before she was served with the three-year “stay away” order, which includes Wal-Mart, and left the courtroom in tears.

Lesson for the next time I serve pro tem: Always let the person you’re going to drop the hammer on speak first. Of course, I don’t intend to serve pro tem until after my vacation in September. But that’s a different story.

The conclusion of the case was that the judge thought my client’s story didn’t add up, and denied the TRO application. A disappointing result, but this judge is quite particular about how and what he wants to see. The client doesn’t blame me for the outcome, and saw me doing what I could on his behalf. But these things are heavily evidence-driven and there isn’t much I can do about the evidence.

The judge agreed with me on one thing — I should have been allowed to file the TRO application as civil harassment claim rather than a domestic violence matter. Well, at least this way there was no filing fee.

But man, oh, man. Seeing the look on the judge’s face during all the TRO applications was painful. People weren’t answering his questions. People were belligerent, rude, and unresponsive to even the most obvious questions and hints dropped from the bench. There were lots and lots of obvious lies being told. At one point the judge called a recess because he was visibly losing his temper with everyone. And of course, having someone just melt down in front of a crowded courtroom and needing multiple bailiffs to restrain her was hardly a pleasure for anyone.

At one point he looked at me and asked, in so many words, “Mr. TL, what are you doing here? You normally practice in a much… cleaner environment.” And so few cases actually deserved restraining orders — most of them were just neighbors not getting along well with one another. It was enough to make me question my desire to become a judge. This judge looked absolutely miserable. I felt miserable listening to all of the crap. Do I really want to sign up to do that sort of thing full time? Maybe sorting out real estate and business disputes as an advocate would be more pleasant.

Oh, and if someone told me I had to stay away from Wal-Mart for three years, I’d be doing a little happy dance. “Really? You mean I get to stay out of crowded, loud, baby-infested megastores where the terrible quality of service is matched only by the zombie-like brainlessness of my fellow shoppers? Woo hoo!”