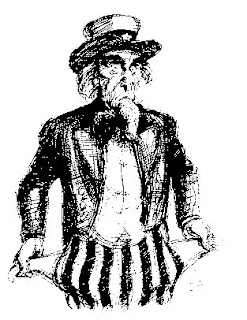 Michael Bennet, an incumbent Senator from Michigan Colorado running for re-election, said this at a recent campaign event that “We have managed to acquire $13 trillion of debt on our balance sheet … In my view, we have nothing to show for it.“

Thing is, Senator Bennet, a Democrat, voted for both the Bush and Obama stimulus bills, for both Medicare part D and the Obama-era healthcare reform bills, increased education funding, and a host of other hugely expensive bills. And he’s now upset that we’re in debt. Democrats discovering the need for fiscal austerity in late 2010 is a bit like Republicans discovering the need for Constitutional restraints on the power of the Federal government in early 2009. Only when your own excesses turn around and bit you in the ass do you condemn them.

In fact, politicians of either party have yet to truly explore or appreciate the depth of our debt problem. Looking at other industrialized nations whose governments have fallen into serious financial trouble — Iceland, Greece, Italy — have tended to examine total debt as a percentage of the nation’s GDP.  But as Bruce Bartlett points out, the real issue is not the ability of the entire national economy to handle the debt, but rather the ability of the government to handle the debt. Bartlett suggests that the appropriate ratio to examine is not debt-to-GDP but debt-to-revenues.  After all, it is from governmental revenues and only governmental revenues that this debt is financed. And of the industrialized nations of the world in financial trouble, the United States has the worst debt-to-revenue ratio, worse even than now-infamous Greece.

Bartlett points out that this macroeconomic ratio is what’s important not just because it reflects the impact of the government to finance its debt, but also the potential that debt to be effectively reduced over time by way of inflation. Here we cross the line from fiscal policy to monetary policy — inflation in the U.S. is governed more than anything else by the prime lending rate set by the Federal Reserve, whose marching orders are to keep inflation as low as possible. But the right move may well be to increase interest rates and start inflating the money. This makes sense if governmental revenues are going to increase along with that inflation, while the debt remains in constant dollars, making today’s thirteen trillion dollars reduce in real economic impact by five percent a year or whatever the inflation rate is.

Bartlett’s point is that If governmental revenues are low compared to the debt as a whole, the impact of inflation effect will be diminished. Put in simpler terms, Bartlett’s worry is that we’re so far in debt that we won’t be able to inflate our way out of it. It’s hard to say if this concern is valid or not; we’re in uncharted waters here.

I think Bartlett ought to look at debt-to-revenue ratios in tandem with interest-to-outlay rates. This would reveal not only our government’s ability to handle the debt it has, but also the extent to which the debt impacts the government’s ability to fulfill its core functions of national defense, administration of justice, sustaining infrastructure, and even tax collection itself. Here again, the United States finds little cause for optimism.  Finding this data turns out to be a considerable research challenge, but I can determine that the U.S. paid 8.5% of every dollar spent by Uncle Sam in 2009 on interest upon governmental debt, which is more than double what the UK paid in the same period of time — only 4% of every one of Her Majesty’s pounds are lost to interest.

Historically when a globally-leading economy has reached such a crisis point, there has not been such extensive governmental debt; other crises have been caused by overextension of governmental financial commitments and met with devaluation of the currency (something which never works out well over the long term) or spinning off suddenly-too-expensive set of geographical commitments to become independent — think about the Roman Empire during the fourth and fifth centuries, the Kingdom of Span at the end of the seventeenth century, the British Empire in the 1920’s, or the USSR in 1989. If it seems to you that I pick dramatic examples demonstrating existential collapses of significant world powers, well, there’s a reason for that, because that’s what we’re up against.

When the Romans, Spanish, British, and Soviets lost the ability to continue paying for core governmental functions, they stopped existing as major world powers, and in two of those cases stopped existing altogether. Note that considering those examples, the more sophisticated financial systems were in place, the decline of the various empires came more and more precipitously.

Politicians like Senator Bennet are not just hypocrites and Johnny-come-latelies to the issue of rectifying our unsustainable spending and debt accumulation habits. By pumping up short-term spending with massive debt, guys like him have placed us in a position where it seems we have no intelligent option but to endure tax hikes in exchange for spending cuts. Since such a prescription is political poison, Bennet will only offer that sort of medicine when a political gun is held to his head. Bennet feels it the form of political pressure endangering his re-election. But the taste of what we must do is so bitter that no one is peddling the whole picture. And that means Bennet and his ilk are simply not to be trusted with handling what is an existential threat to the United States.

I’m not convinced that the Tea Party is really aimed at this issue; Tea Partiers want to repeal Obamacare because they seem to think that a robust healthcare system is somehow an attack on personal freedom. This strikes me as profoundly illogical. The reason to repeal Obamacare and replace it with nothing is that we aren’t rich enough to afford Obamacare. The Tea Party crowd has been silent, so far as I can tell, on the issue of whether we should cut the defense budget; they tend to overlap with the “Support Our Troops” yellow-ribbon-wearing crowd, so drawing down the total size of the military does not strike me as a Tea Party agenda bullet item.

Entitlement reform is great politics when it’s someone else’s entitlements you’re talking about reforming, no matter where on the spectrum you fall or what label you affix to yourself. Means-testing Social Security more aggressively, however, earns you the wrath of large numbers of voters. Changing the way tax deductions are given for home mortgage interest payments would affect at least a hundred million Americans and effectively raise their taxes, so no one is talking about that.

There are groups out there starting to take debt seriously. But there aren’t very many of them in Congress, and there don’t seem to be very many of them running for Congress, either. Until our collective backs are up against a wall, chances are no one will confront this issue in a meaningful way. It will take a figure of remarkable political skill and vision to lead us out of this problem. Such a figure once began a struggle of similar magnitude with these words:

I hope that any of my friends and colleagues, or former colleagues, who are affected by the political reconstruction, will make all allowances for any lack of ceremony with which it has been necessary to act. I would say to the House, as I said to those who have joined the government: “I have nothing to offer but blood, toil, tears and sweat.” We have before us an ordeal of the most grievous kind. We have before us many, many long months of struggle and of suffering.

That was a different struggle, to be sure, but Sir Winston appreciated earlier than his colleagues the nature of the existential threat his nation faced and for years was a political Cassandra unable to recover from the shame of the Gallipoli Campaign until a gun was almost literally held to the heads of Britain. If we do not start appreciating that this problem is one of this magnitude, and instead reward our politicians when they say that they are shocked, shocked that there is gambling going on in this establishment while they are collecting last night’s winnings, what we’re going to get is more of the same instead of a solution.