Connecticut is looking at instituting a Yale Tax. Specifically, a tax on endowments for universities meeting certain qualifications. Basically, Yale.

Taking a suggestion from Yale alum Walter Olson, Ira Stoll argues that the university should consider relocating to Boston. Boston? Meh. That might help with the tax situation, and he makes some other arguments, but on the whole seems penny-wise and pound-foolish and ignores other Yale issues.

Florida Governor Rick Scott on Tuesday called on Yale University to consider a move south if Connecticut legislators follow through on a proposal to tax the net investment profits of the university’s $25.6 billion endowment. {…}

“With news that the Connecticut Legislature wants to unfairly tax one of the nation’s most renowned universities to deal with the state’s budget shortfall, it is clear that all businesses in Connecticut, including Yale, should look to move to Florida,’’ Scott said. {…}

“If Connecticut lawmakers are seriously considering another tax on Yale, businesses and families should be concerned about the other tax increases their Legislature will consider. We would welcome a world-renowned university like Yale to our state and I can commit that we will not raise taxes on their endowment. This would add yet another great university to our state.” 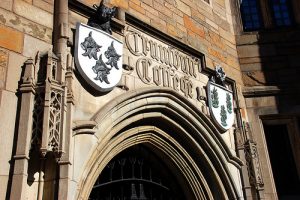 General Electric may have moved out of the state, but of all of the institutions to leave a state for tax reasons, universities would be among the most difficult. And sure enough, the university has expressed disinterest in the prospect.

I have long been of the belief that it’s been to the detriment of this country that as our population has grown considerably, our premier institutions of higher learning have not. I’ve long said “We should have a Harvard West! Harvard Texas!” But hey, Yale Florida would work.

The typical argument against my proposal is that you just can’t have more than one Harvard and have it hold the same prestige. This is both true and false. It is true that the prestige of Harvard and Yale revolve around their exclusivity, but it’s not as though we have fewer premier academics per-capita than we did fifty years ago. It’s not as though we have fewer stellar students per capita that we did fifty years ago. The universities themselves talk about how nearly impossible it is to choose among such an amazing crop of students. There are probably enough students that could have gotten into Harvard fifty years to fill a dozen schools. It’s just that now they go to Rice, Duke, and other universities. But no matter how good those schools get, even if their median student is better than that of Harvard of yesteryear, almost none of them will completely get their due.

For the most part, it’s not in the interest of the universities to be anything but as selective as they can be. If only being able to accept 1 out of 50 of the equally indistinguishably greatest students in the country is good, then accepting only one out of 250 is even better! Or something like that.

Yale, though, could be an exception. Not just because of the tax thing, but also because being where it is it lives so much in shadow of Harvard. I mention above that the students accepting the Harvard students (and Harvard professors) of yesteryear aren’t getting their due, but there is one major exception: Stanford. There’s the Ivy League, and there’s Stanford. Arguably, these days, there’s Harvard and there’s Stanford. Stanford has a benefit that separates itself from every other Not Harvard, which is that it is far away from Harvard’s shadow. Yale, in contrast, seems to exist almost entirely in Harvard’s shadow.

Florida would fix that!

Now, Rick Scott wants them to move their entire university. That really doesn’t make a whole lot of sense. But if Yale set up a school in Florida, that could be a different story. Why would anyone go to Yale if they can go to Harvard? Most of the time, I’m not sure. Stanford, sure! Silicon Valley and California weather. Florida has no Silicon Valley, and the weather is different, but it has a great winter climate and beautiful beaches. There are students and faculty who would likely be interested in going there for all sorts of lifestyle reasons that Connecticut just can’t provide. They can move the endowment there and along with student tuitions the thing could pay for itself.

While Harvard Texas would run a risk of being a notably inferior institution, Yale Florida would have a lot more potential to possibly even exceed Yale Connecticut or at least challenge it like Stanford challenges Harvard. The biggest problem with my preference for expanded Ivy League schools is real estate, and regional campuses can be a tough sell. Yale Florida satisfies both concerns.

35 thoughts on “Yale on the Beach”