Writing in the Wall Street Journal, Donald Trump argued that Ted Cruz’s delegate-conscious strategy was essentially a subversion of the popular will. He notes,

While I am self-funding, Mr. Cruz rakes in millions from special interests. Yet despite his financial advantage, Mr. Cruz has won only three primaries outside his home state and trails me by two million votes—a gap that will soon explode even wider. Mr. Cruz loses when people actually get to cast ballots. Voter disenfranchisement is not merely part of the Cruz strategy—it is the Cruz strategy.

The great irony of this campaign is that the “Washington cartel” that Mr. Cruz rails against is the very group he is relying upon in his voter-nullification scheme.

Uncharacteristically, the Journal published the piece without a paywall, and accordingly it attracted major attention. Trump’s opponents attacked the piece from multiple angles. Jay Cost at The Weekly Standard argued in favor of the parallel delegate track as a necessary means to break a deadlock when the primary results do not crown a standard-bearer. Ramesh Ponnuru at National Review noted that Trump has been the beneficiary of a system that does not necessarily seek consensus; to Ponnuru, it is “too easy” for a candidate without the backing of a majority to become the nominee.

Both Cost and Ponnuru–and many others who have made similar points–are largely correct. But I think there is an important additional point to add: the words and discourse we use for describing the nominating contest are often inappropriate, and have left Trump with his opening to make the “will of the people” case. Part of the job of Trump’s opponents is to make the opposite case.

The Washington Post’s story on Trump’s victory opened like this:

Donald Trump easily trounced his opponents in Tuesday’s Republican presidential primary in his home state of New York, notching his biggest win yet and pulling further ahead of Ted Cruz and John Kasich in the delegate count.

Trump’s blowout victory — which was propelled by voters’ overwhelming desire to elect a political outsider who could bring change — positions the billionaire mogul for a hot streak in five East Coast primaries next week and brings him closer to securing the nomination with an outright majority of pledged delegates.

Near complete returns showed Trump with just over 60 percent of the vote statewide, putting him on the path to win most of New York’s 95 delegates.

There are several points of emphasis in those three short paragraphs, but the center of the lede is about how Trump “easily trounced” his opponents, securing “just over 60 percent of the vote.” The crux here is that Trump won a sweeping popular victory. It is worth considering, though: what exactly does a “state win” represent in terms of the selection of voters? Primaries and caucuses always have substantially lower turnout than a general election, to the point where a minuscule fraction of the registered voter population participates. Some examples follow:

Thus small percentages can lead to the appearance of a smashing victory. To put these numbers in perspective, President Obama won Minnesota with over 1.5 million votes. He won Massachusetts with over 1.9 million votes. Mitt Romney won North Carolina over 2.2 million votes. In all cases, the eventual winner won the election with more than five times the vote in the primary or the caucus. Such a disparity is a difference in kind, not degree, and yet we use the language of popular democracy to describe these contests: “key wins,” “resounding victory,” “crushing victory,” “domination of southern states.”

Indeed, the language of the public coverage of the primary contests is extremely democratic. We see this in the media coverage, down to the television graphics themselves. Here’s an example: on Super Tuesday, in a very close race, Donald Trump outlasted Marco Rubio and won a plurality of the vote in Virginia. The graphic from MSNBC: 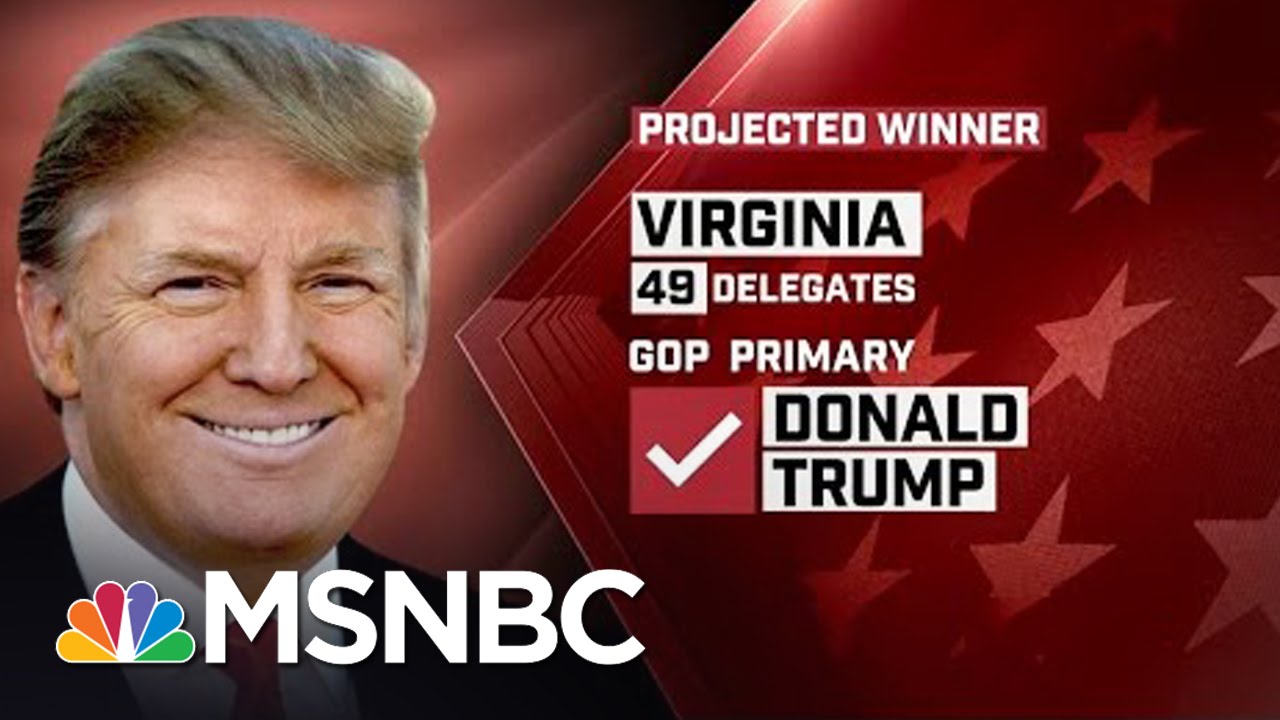 As a point of comparison, here’s what ABC News used to indicate that Mitt Romney won North Carolina: 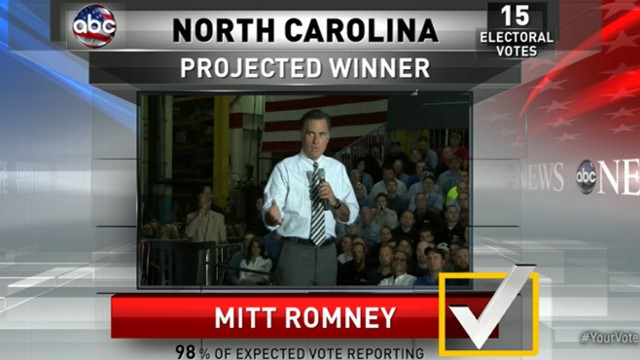 The similarities are evident: the candidates are declared to have “won” the states, with the significance of the state indicated by the number in the top right of the graphic: “delegates” and “electoral votes” are portrayed as roughly synonymous. There is a reason we talk about state wins for a general election: winning a state connects directly into the Electoral College totals, and the Electoral College decides the president. The relationship between delegate allocation and state victories in the nominating process is much more tenuous: most states use some sort of “proportional” representation mode, where the number of delegates awarded is correlated with the total vote share, or a Congressional district-level vote share.

This reaches its silliest point when pundits breathlessly wait over returns coming in from proportional states on the Democratic side. No one was sure who won Iowa, late into the night. Finally, CNN made the call: 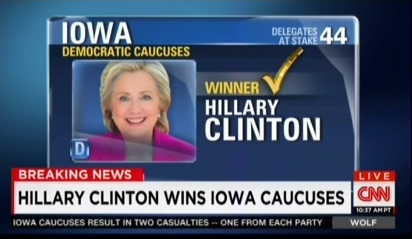 It looks like Clinton would nab 44 delegates, the way the graphic is structured. But the Democrats award proportionately, and the Iowa winner was mere trivia. A similar dynamic played out on the Republican side with Missouri. The focus was on the state-level winner, but what really mattered was the geographical distribution of votes.

Likewise, the pundits love electoral maps. On Election Night, the networks scramble to fill in their state maps as red and blue as they count to 270. Again, considering the Electoral College, this is entirely appropriate. But they do the exact same thing for the primaries: we see maps of states as if the states were winner-take-all, but they are (usually) not.

We fashioned our discourse of “state wins” because it logically represented the way that our presidents get elected. But said discourse has only a tangential correlation to the nominating process–and we use the very same discourse, right down to the graphics we use on election nights. And the discourse is, at best, a proverbial square peg in a round hole.

None of this is to say that primary results are inappropriate, illegitimate, or unexpected. But the problem is that Trump is exploiting the language of democratic legitimacy to claim a popular mandate and a right to the nomination, when he’s barely getting 10 percent of registered voters to endorse him. He has no popular mandate, no matter what he says.

We’re accustomed to the discourse of democracy with the primaries, but the truth is that this really isn’t popular democracy. They are party contests that have acquired a patina of democracy, in that they are competitive elections. But they do not, in any way, shape, or form, represent the “will of the people.” It’s a haphazard system that has two aims: produce a nominee, and grant the nominee the illusion of democratic legitimacy. Having a candidate that appears to be affirmed by a popular vote offers us the image of a popular process, and that was the goal: to prevent a situation where a candidate without a popular endorsement can be the nominee. But a process where 7 percent of the voting population, state-to-state, can select the nominee is barely democratic.

Now, make no mistake: whether this process should be more democratic is a worthy question for debate. But right now, the process only looks democratic. And yet people are accustomed to seeing it as a popular process; 58 percent of Republicans think that the nominee should be the delegate leader, even if he doesn’t have a majority.

The reality is that we could very easily portray Trump’s victory in New York differently, using different assumptions and points of emphasis. Another newspaper article might read as follows:

Trump, who has claimed a broad popular mandate to be the Republican nominee, has consistently failed to win majorities in any state. New York–a heavily-Democratic state that has not voted Republican since 1988–was the first state where Trump won a majority of the votes cast.

Trump’s struggles to extend his support beyond his devoted fans in popular media, as well as to gain the backing of loyal pledged delegates, suggest that he will have difficulties securing the required 1,237 delegate votes at the Republican National Convention. Traditional Republican power brokers continue to resist Trump, with some going as far as vocally supporting the much-loathed junior senator from Texas, Ted Cruz.

This version is no more right or wrong than the Post’s version; it just uses different points of emphasis. It includes no analysis; it is merely a way to present the facts differently. Instead of accepting the language of popular democracy, it focuses on the lack of a popular mandate based on the actual vote totals, and a lack of institutional support based on the existence of #NeverTrump. We do not think of the nominating contests this way by default, but that is simply a choice we have made: we have adopted the terms and tools available to us, without critique, comment, or consideration.

Thus Republicans face a challenge over the next three months: they must argue against the application of the discourse of democracy, running contrary to how we have been programmed to think about the nominating process. By July, rank-and-file Republicans should be skeptical of the notion that the plurality leader has a moral right to the nomination. If they are, then we can escape Trump and the further beclowning of American democracy. But if they’re not, the pressure to nominate Trump will be intense.

Introducing Value Over Replacement-Level Republican President (VORRP)A Unifying Theory of Trumpism and Puerto RicoOld Dominion
[archive]
Please do be so kind as to share this post.